Edmonton is often referred to as a "Festival City" and it's reputation is very much earned with upto 100 events through a year falling under the festival tag. Often times in the summer you have to pick which fantastic event you want to attend and unfortunately forgo attending another. However, in the winter its a dead season...or so I thought until this year when Chrissy and I decided to explore some of the festival events specialized to the winter season.

The Deep Freeze Festival celebrated it's 8th year in 2015 but it was the first time Chrissy and I ever attended the extended street party in the Alberta Avenue area (118 Avenue).

Probably the most loved feature of the festival is the actual Deep Freezer Races. As you can see below it looked like a lot of fun. However,  I couldn't convince Chrissy to let me take her for a spin. 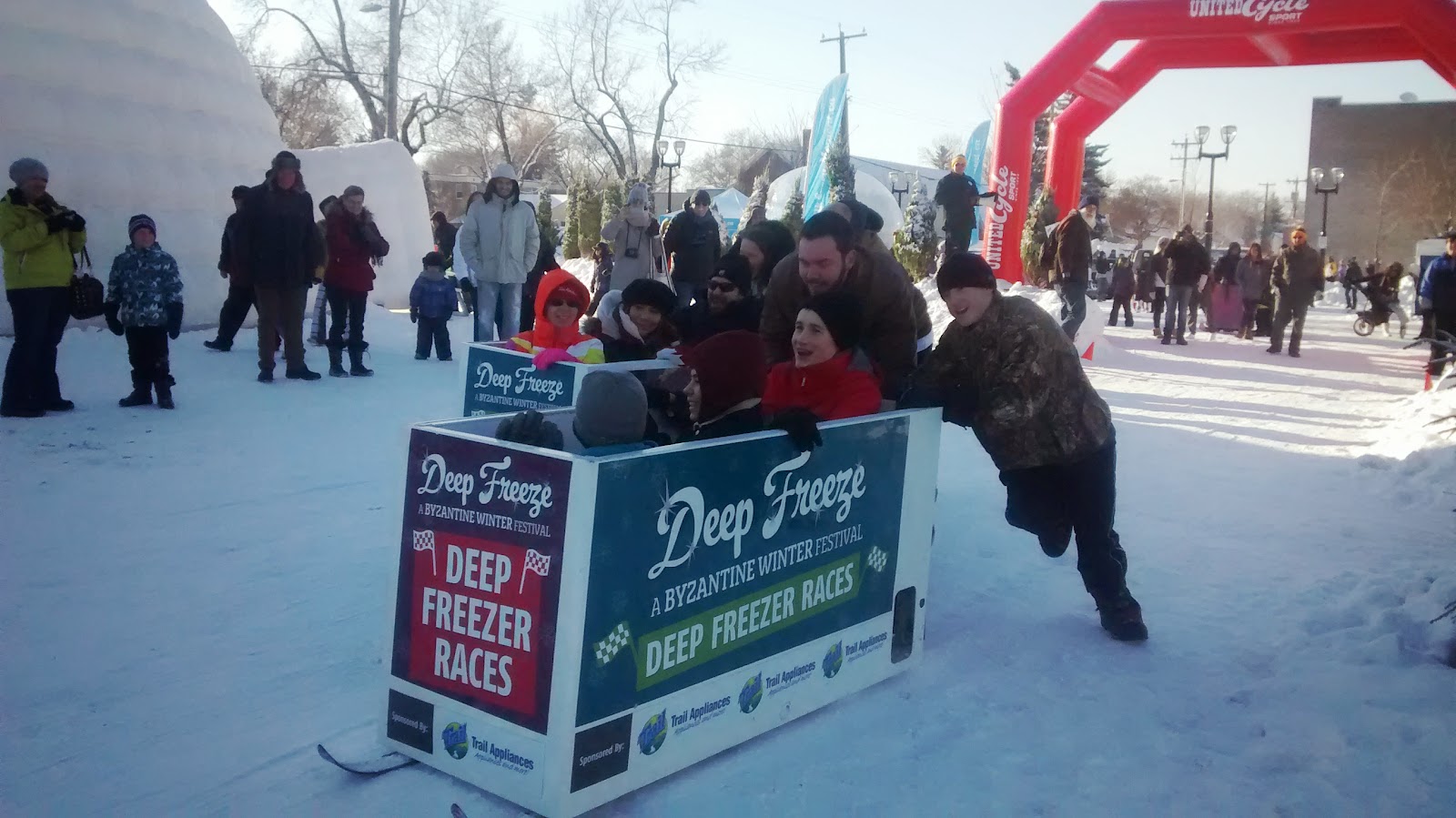 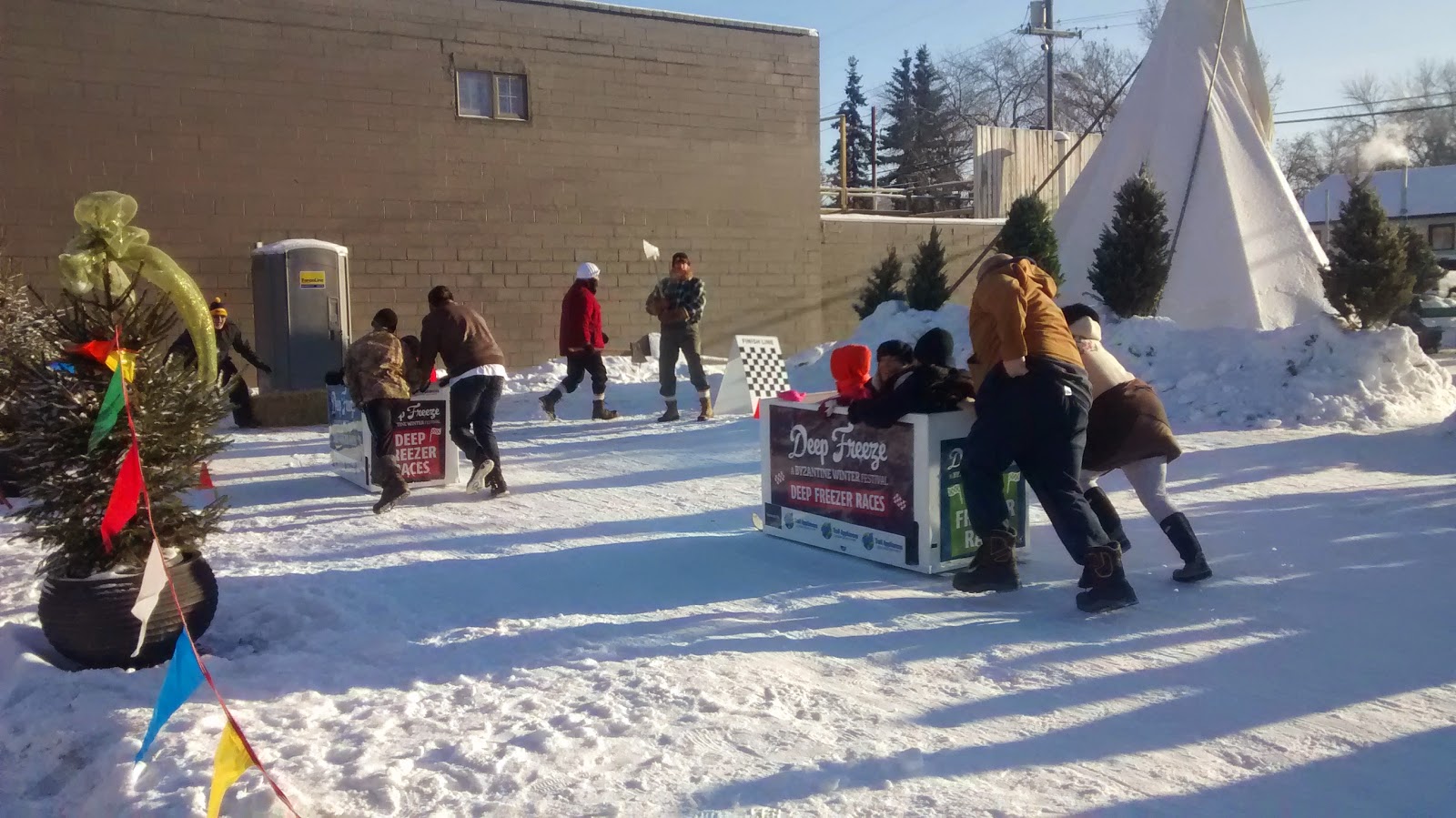 Walking around the street we stopped in to see some luxurious pelts in surprisingly well heated tepee's, warmed ourselves near the fire, checked out the street action, watched some hockey and judged some amazing snow and ice sculptures. 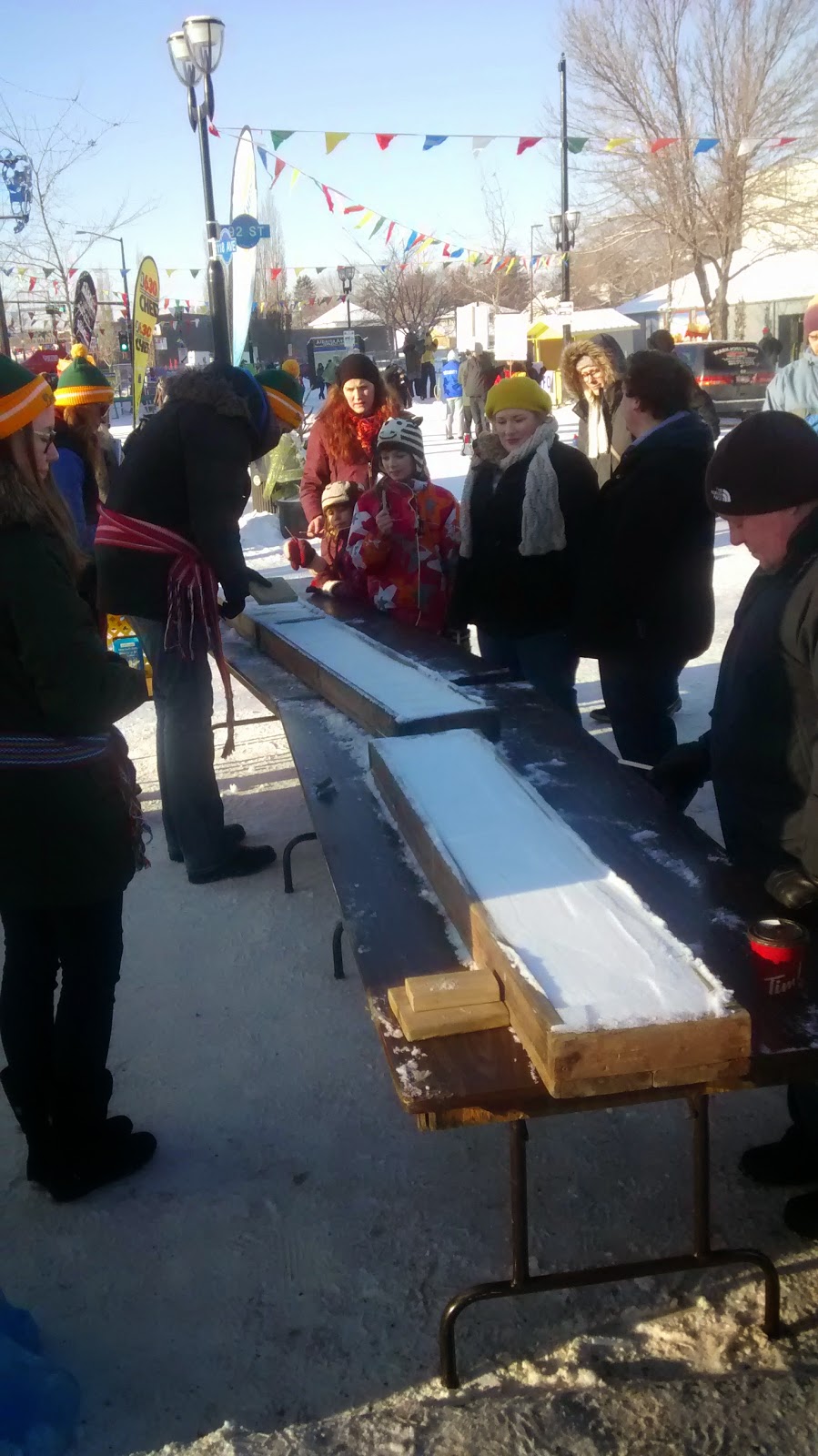 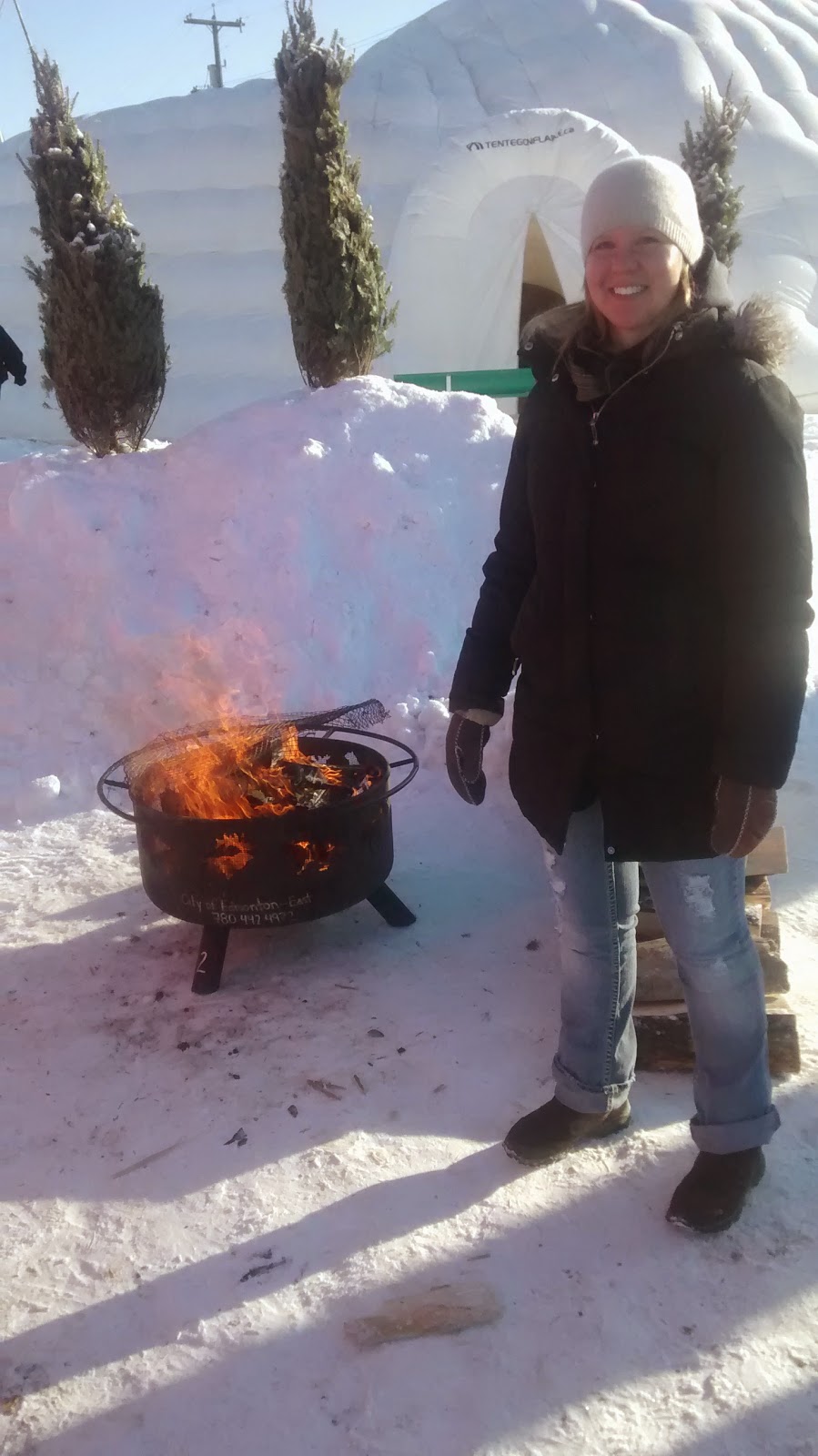 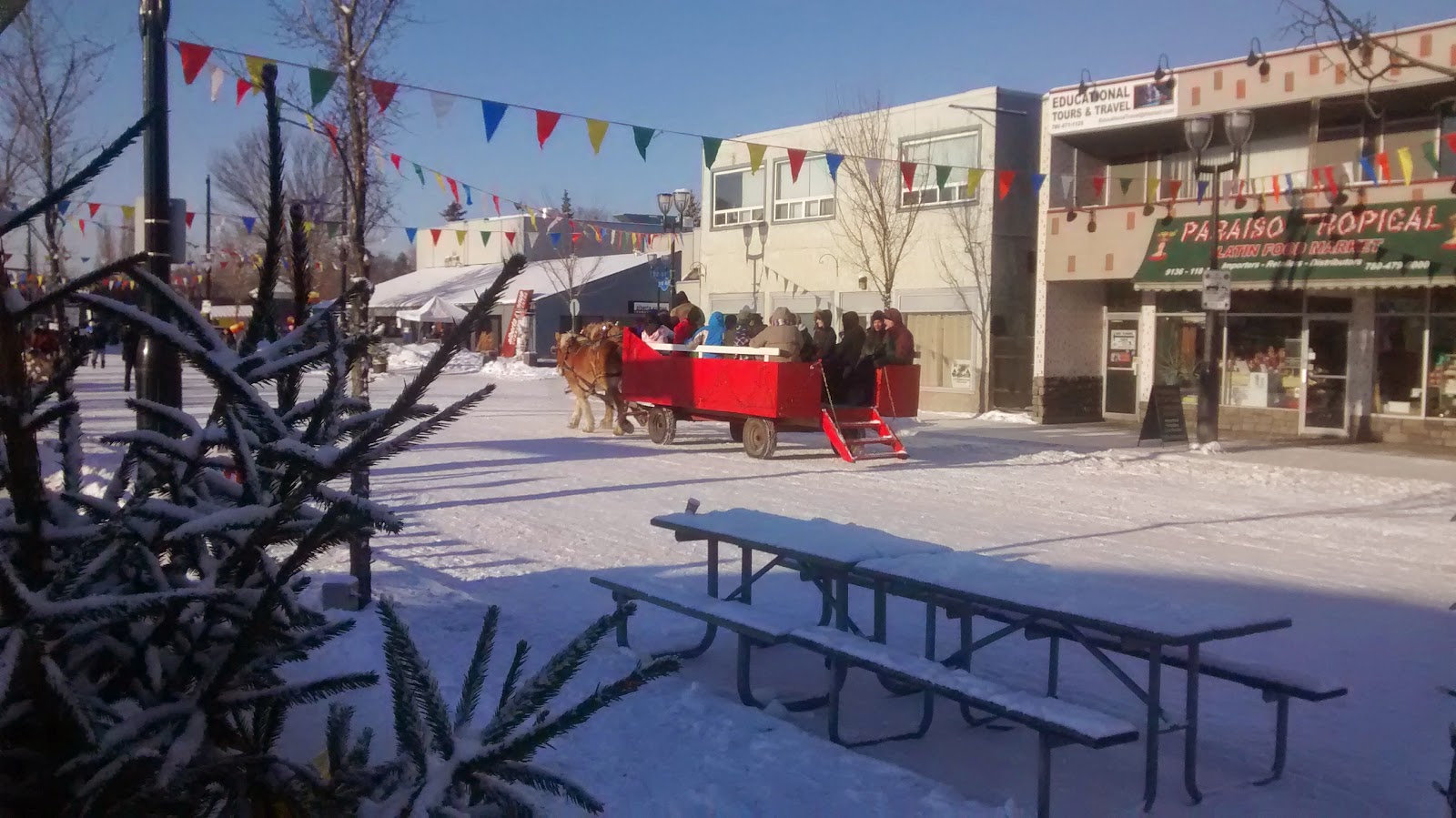 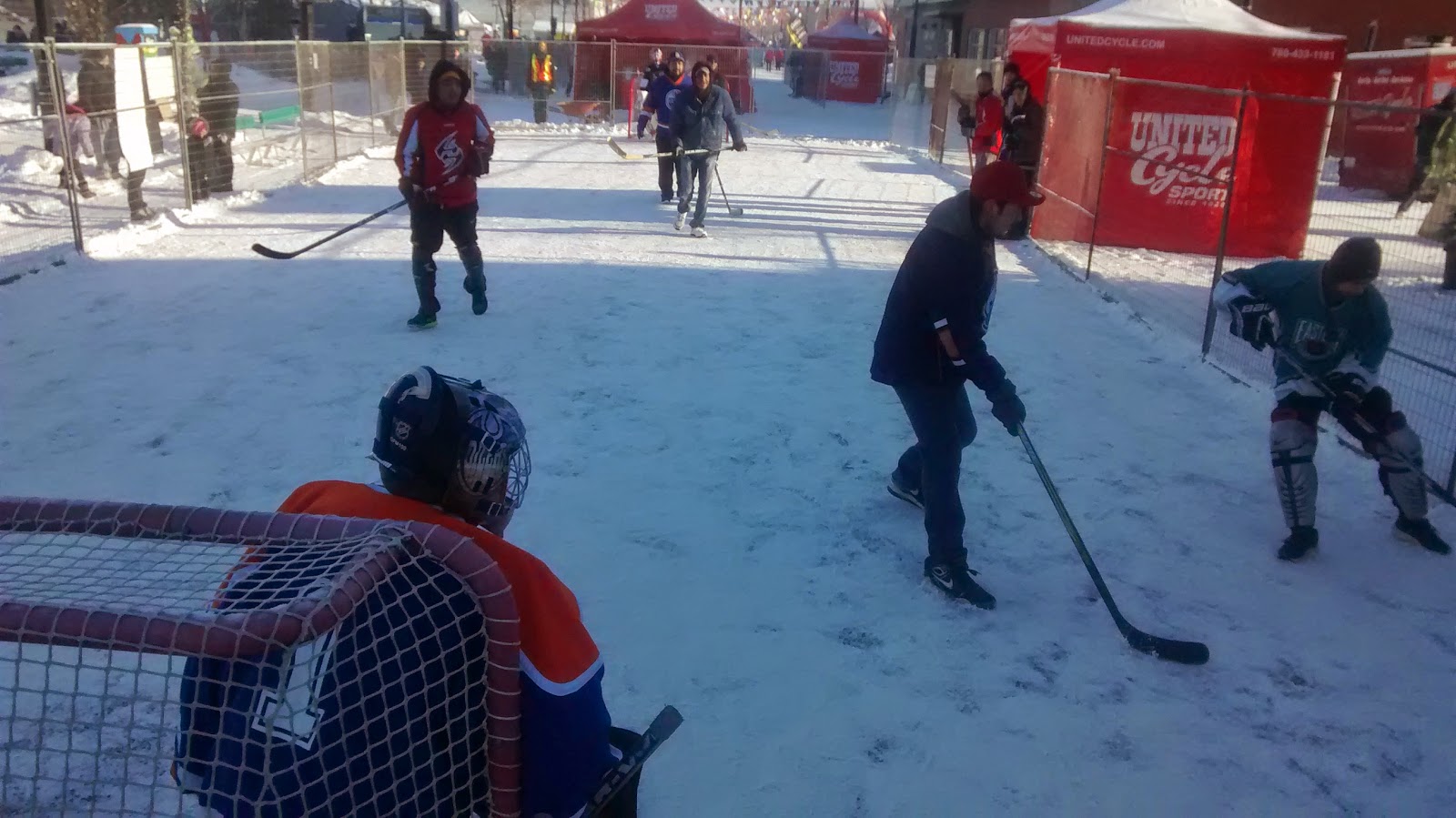 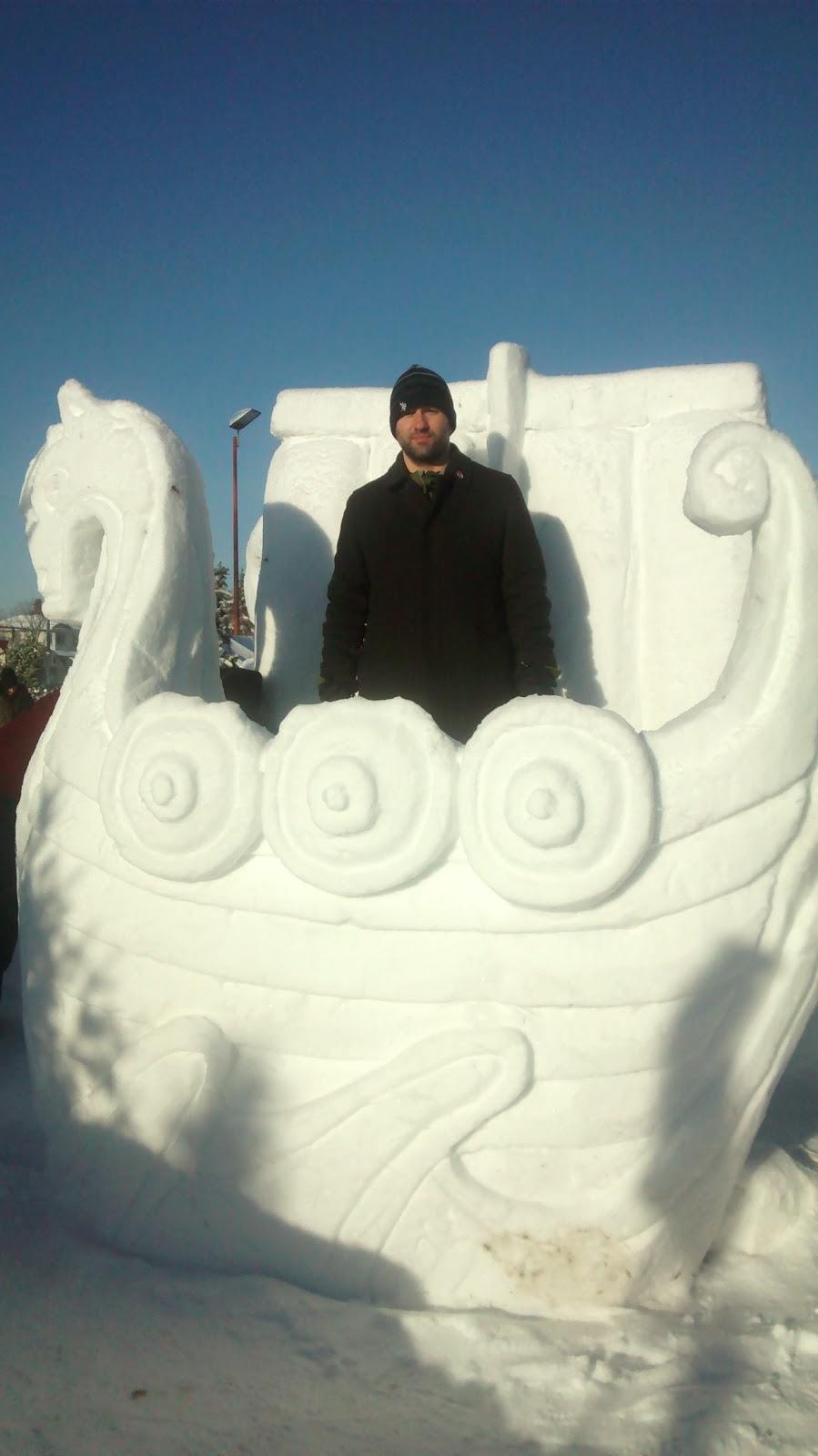 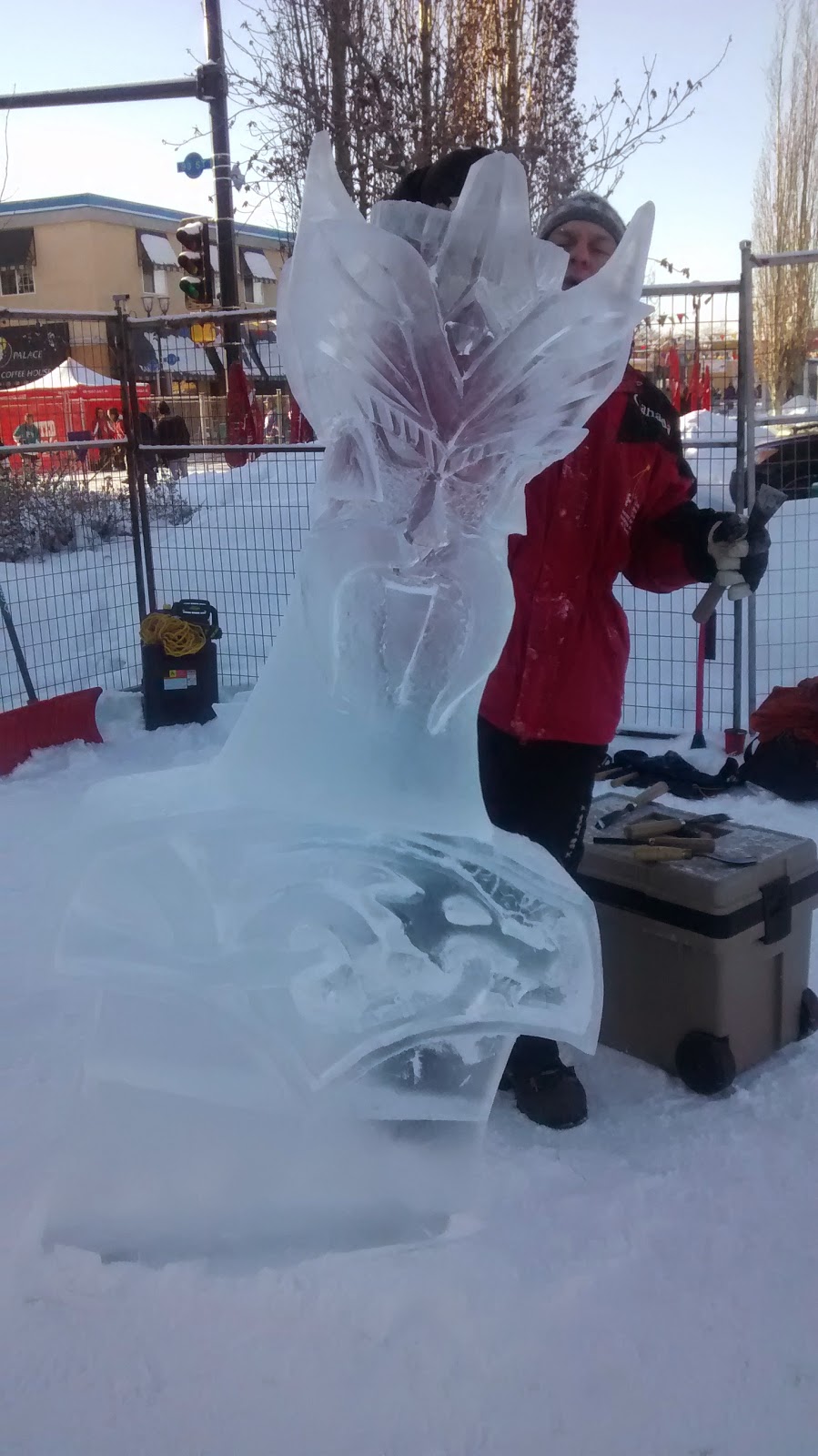 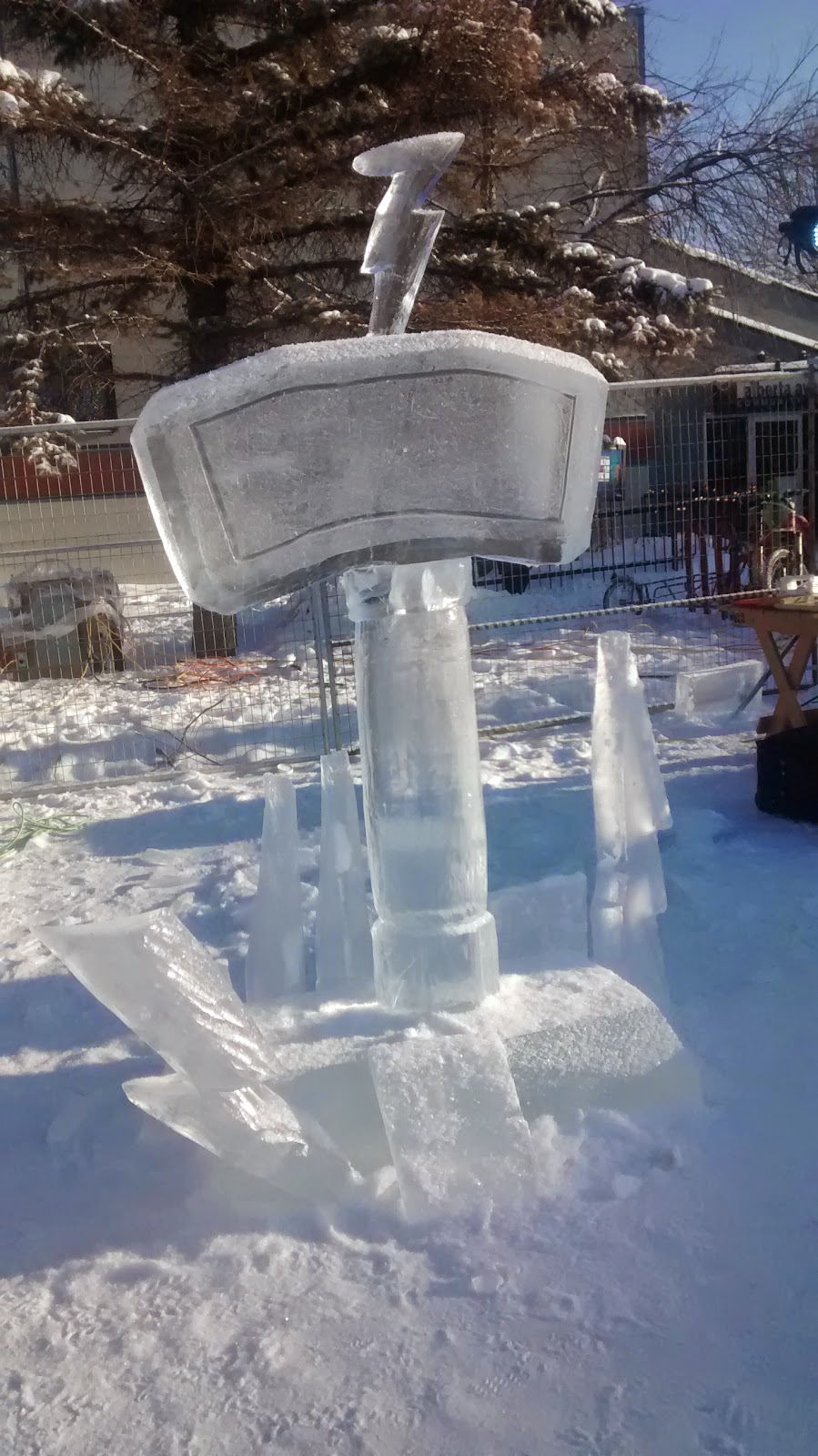 Of course while we were on Alberta Avenue we had to visit a few of their unique shops. We were treated to some belly dancing at Bedouin Beats, the best egg tarts ever at Handy Bakery and some fantastic Latin American specialty items at Paraiso Tropical - both of the tantalising and scary type :) 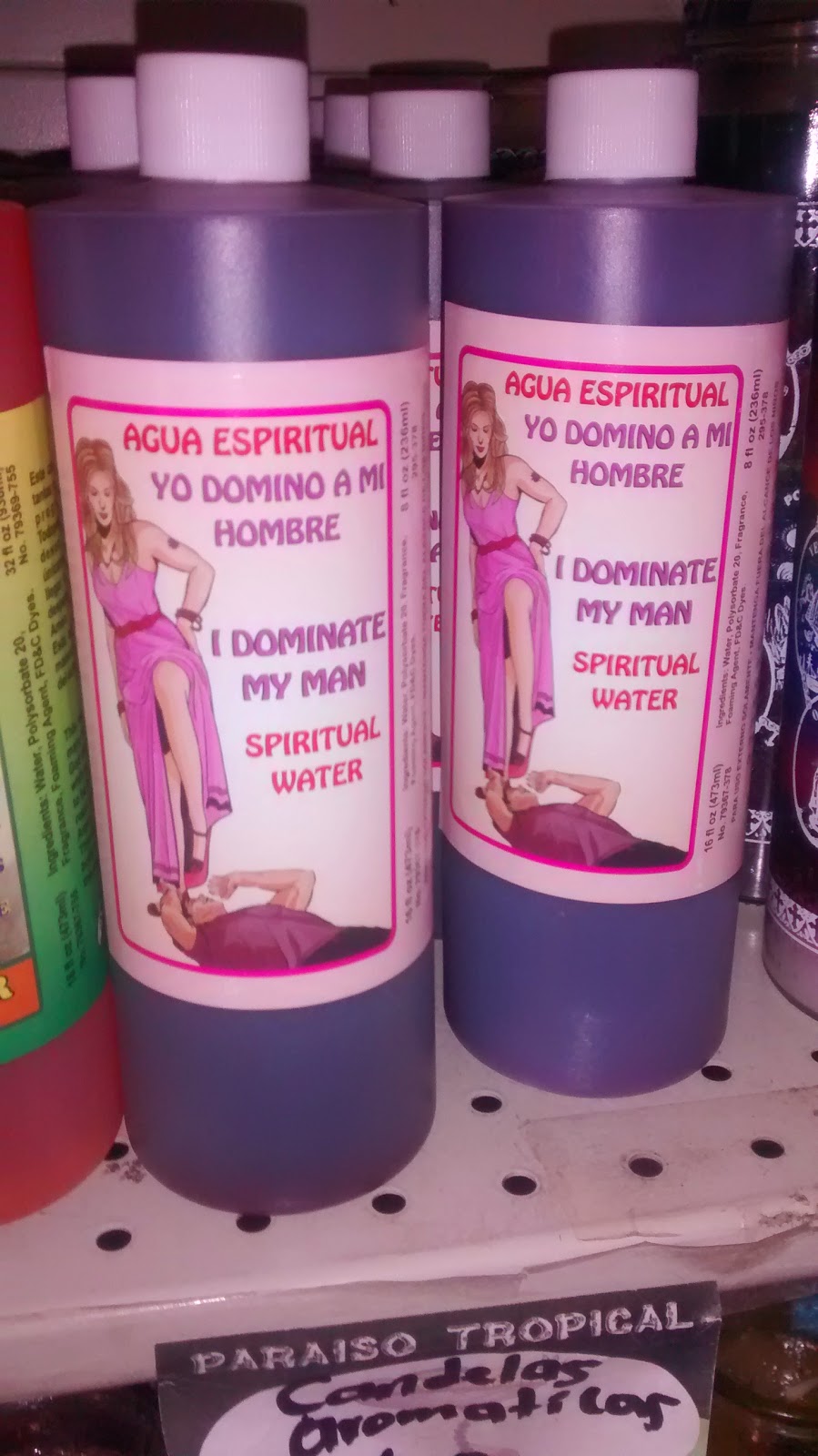 We almost never made it to Silver Skate Festival. After a big Sunday breakfast at home we were feeling even more sloth like than usual when collectively we gave ourselves a kick in the ass and decided to head outside. Looking for something low impact we decided that we would attend the French Quarter Farmers Market. On a lark I decided that I would throw our skates into the trunk of the car just in case we felt really ambitious.

After walking around the market for a little bit and grabbing a coffee at Cafe Bicyclette we decided that "maybe we should take a drive to Hawrelak Park and see what is going on". As soon as we arrived at the park we kind of just got swept up into it all the activity and our laziness and ambivalence disappeared.  Grabbing our skates from the trunk we rushed to the ice to do a few laps around the lake. 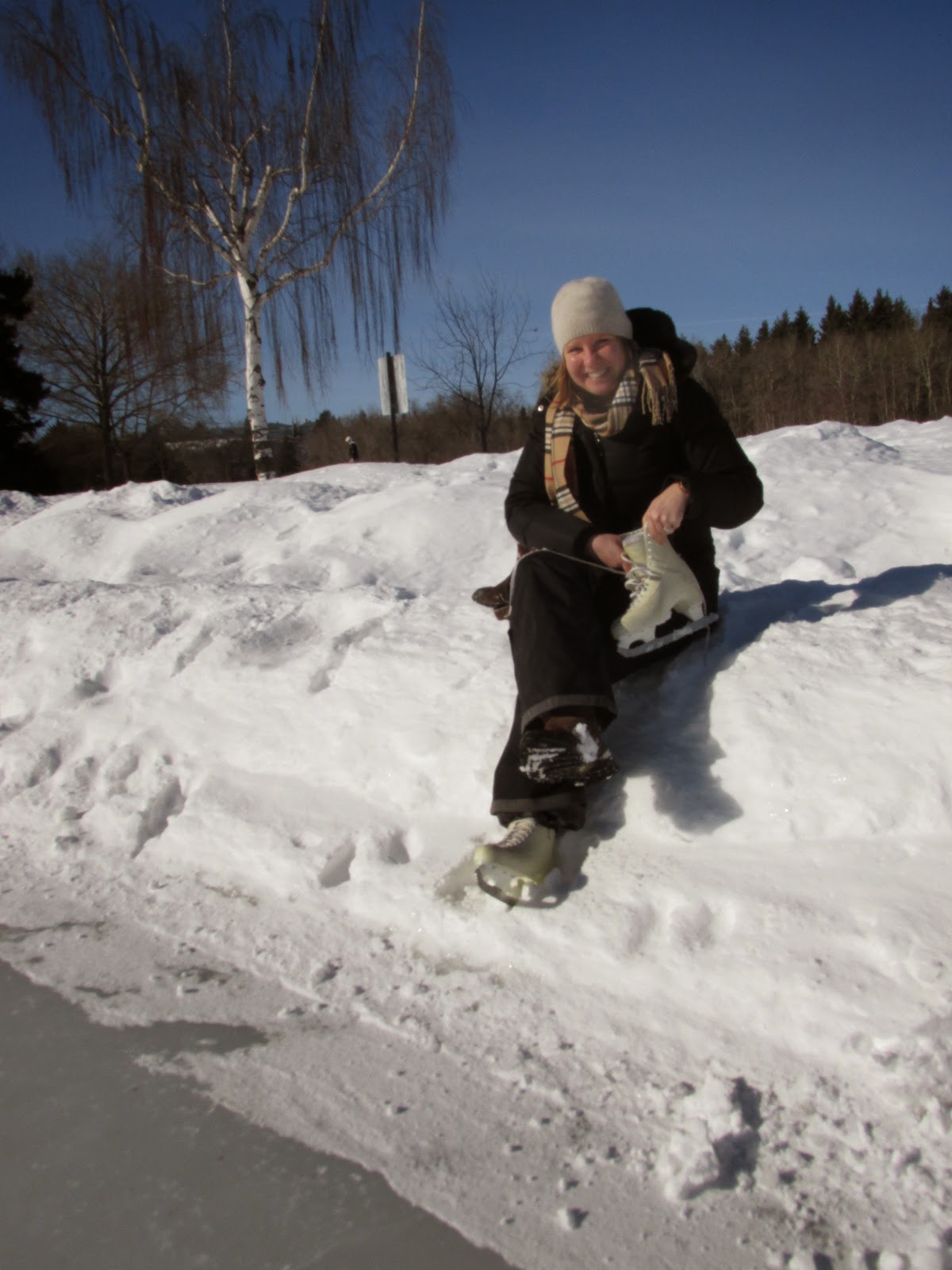 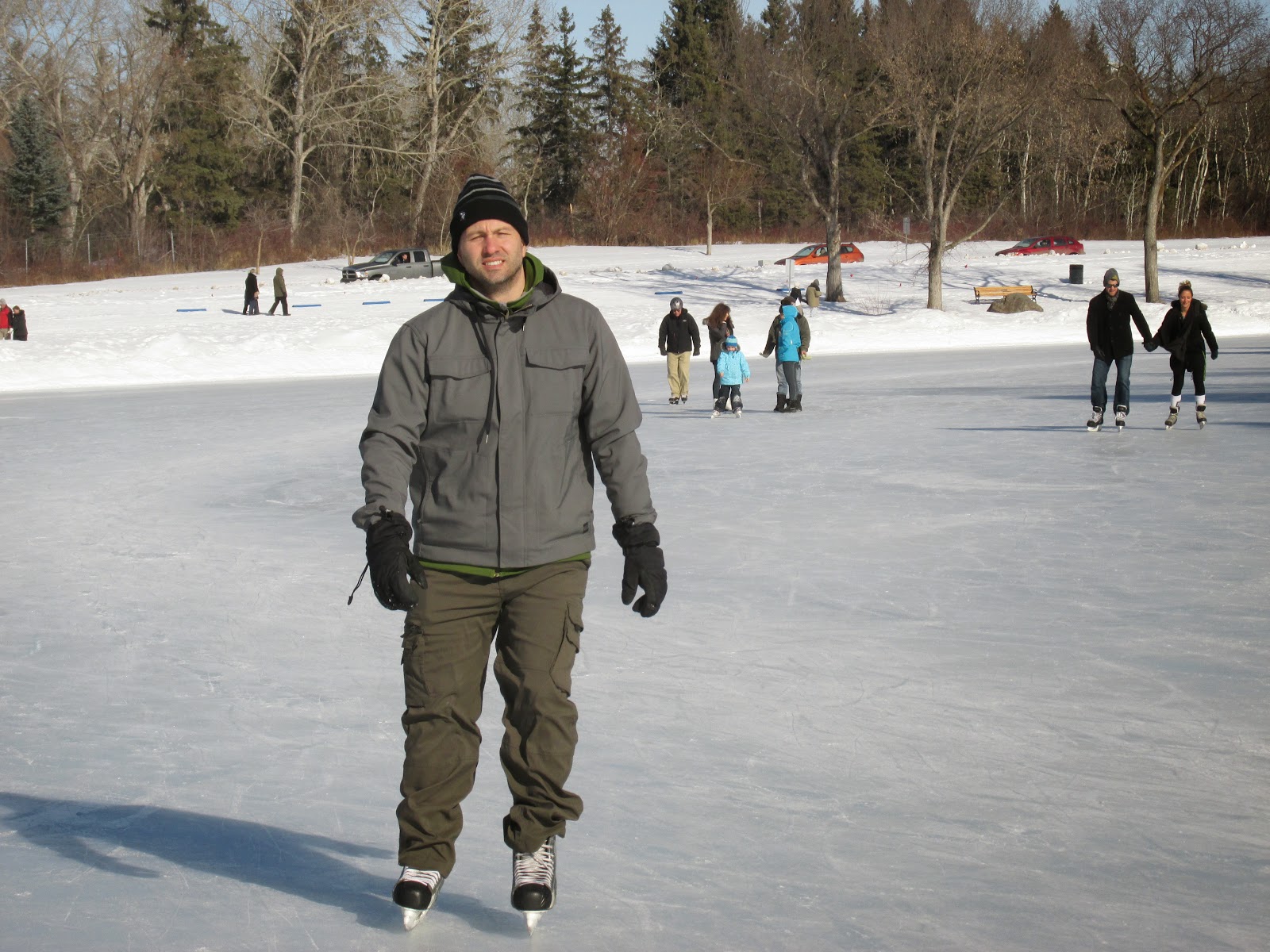 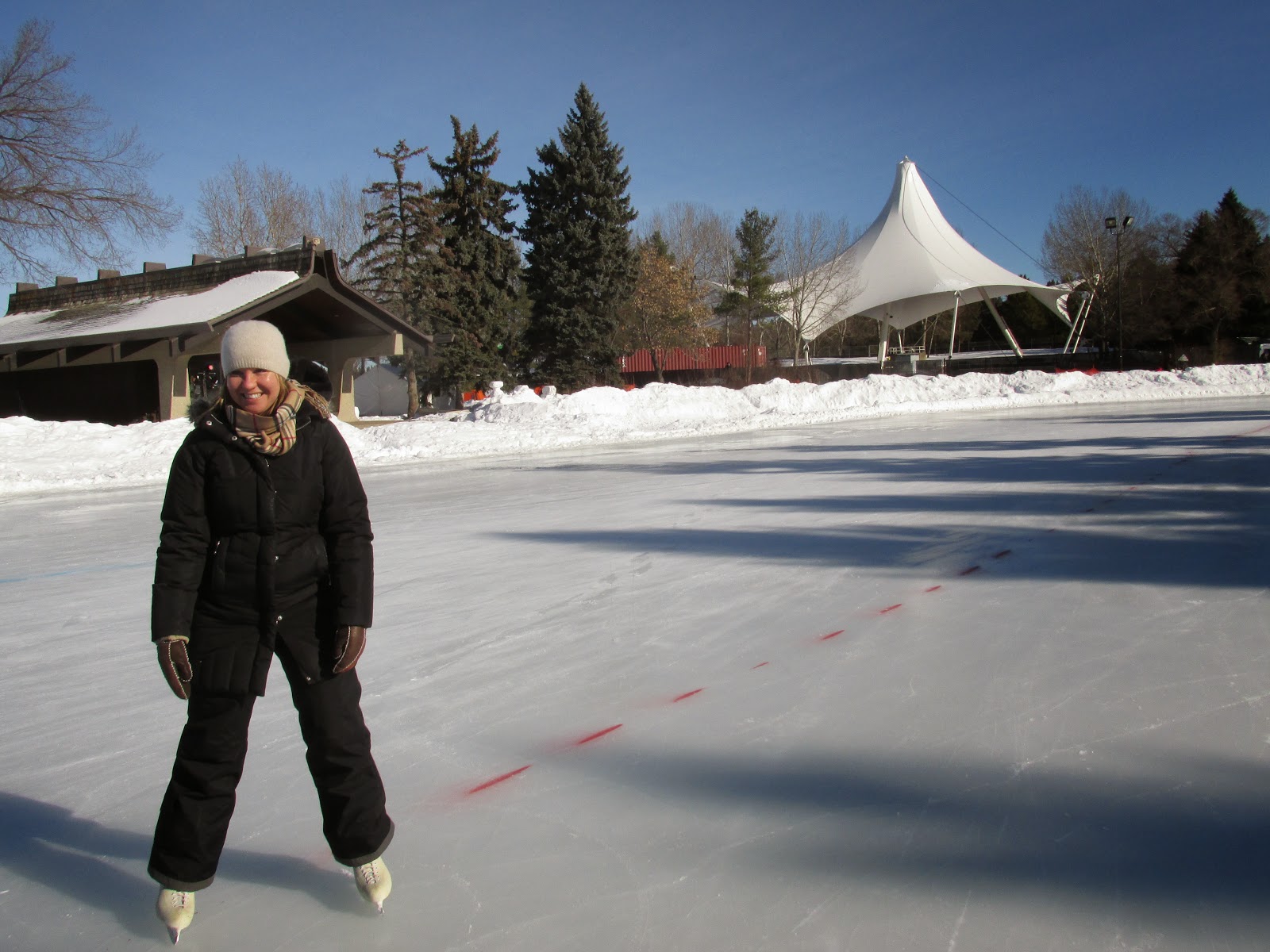 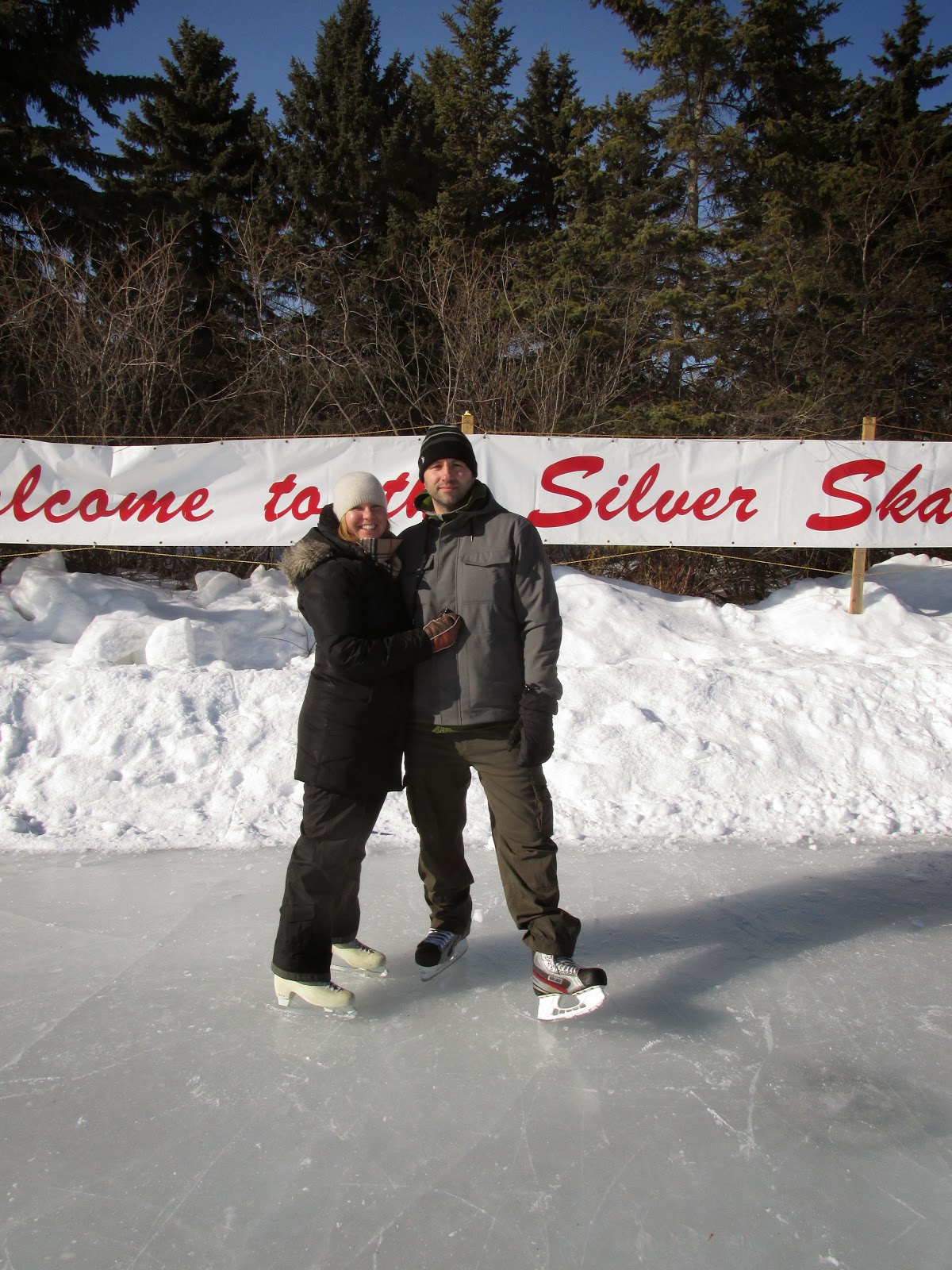 Seeing so many people skating, snowshoeing, cross country skiing and just enjoying themselves outdoors was infectious. We wandered through the park taking in the sights and activities. 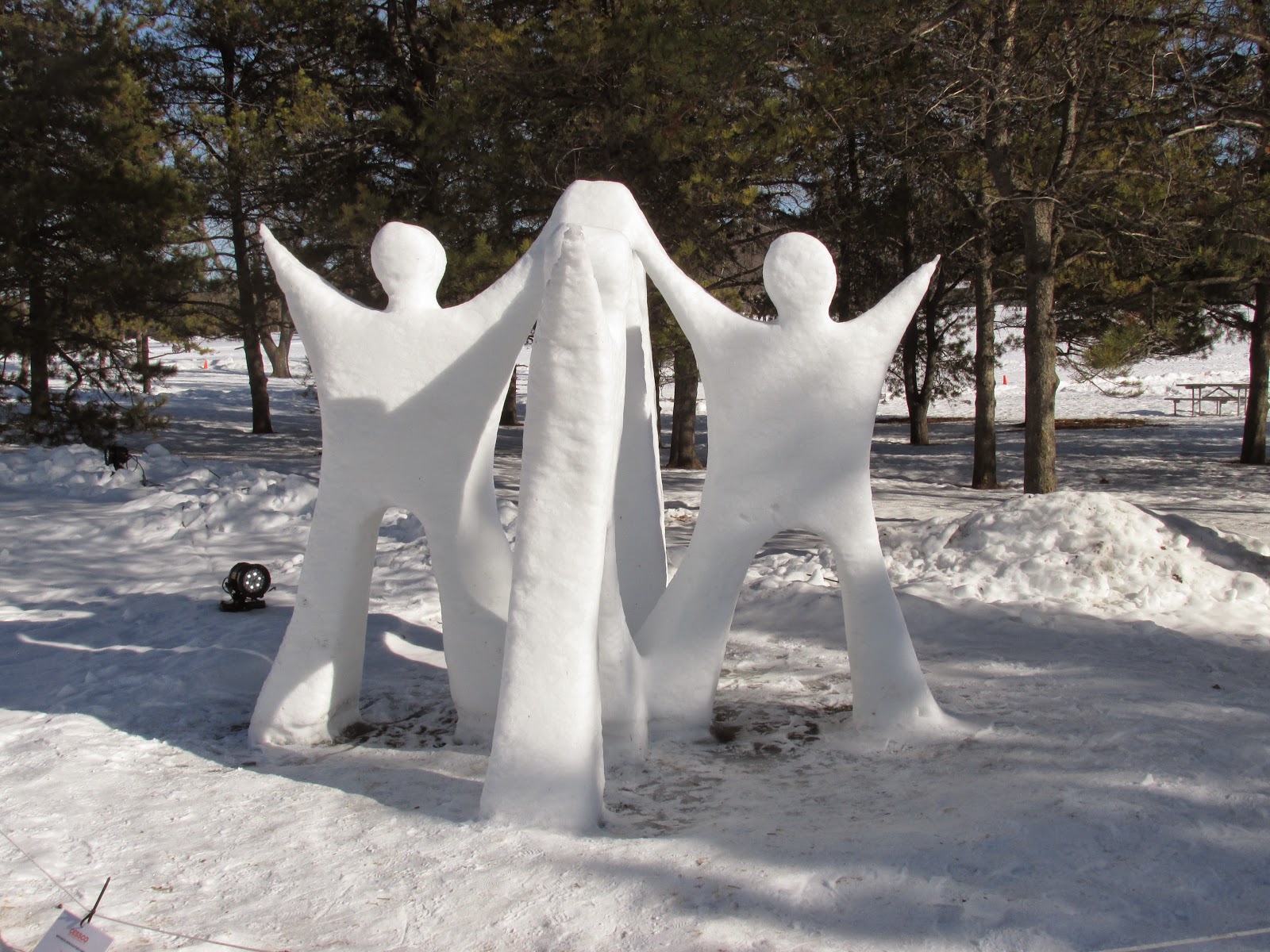 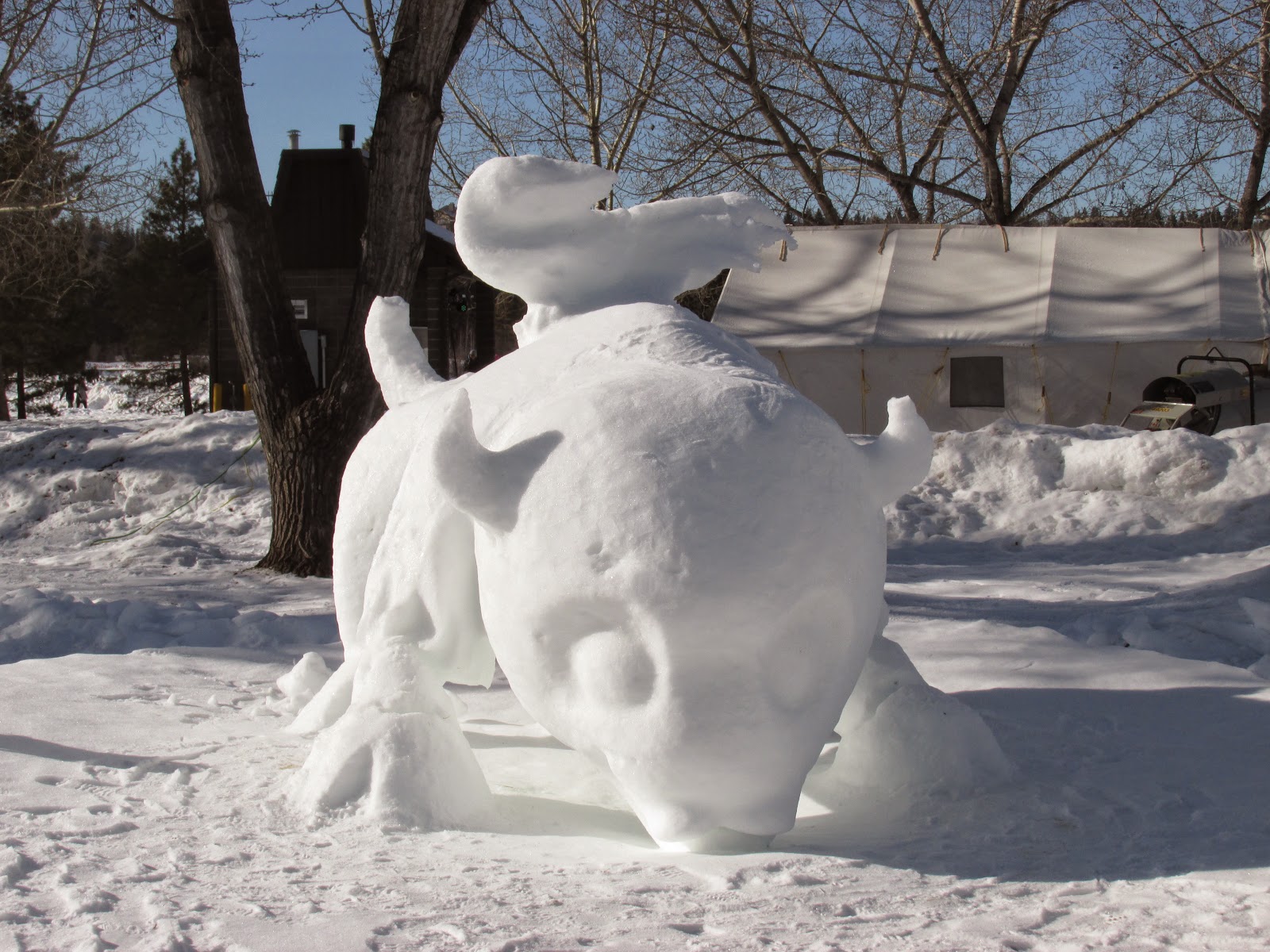 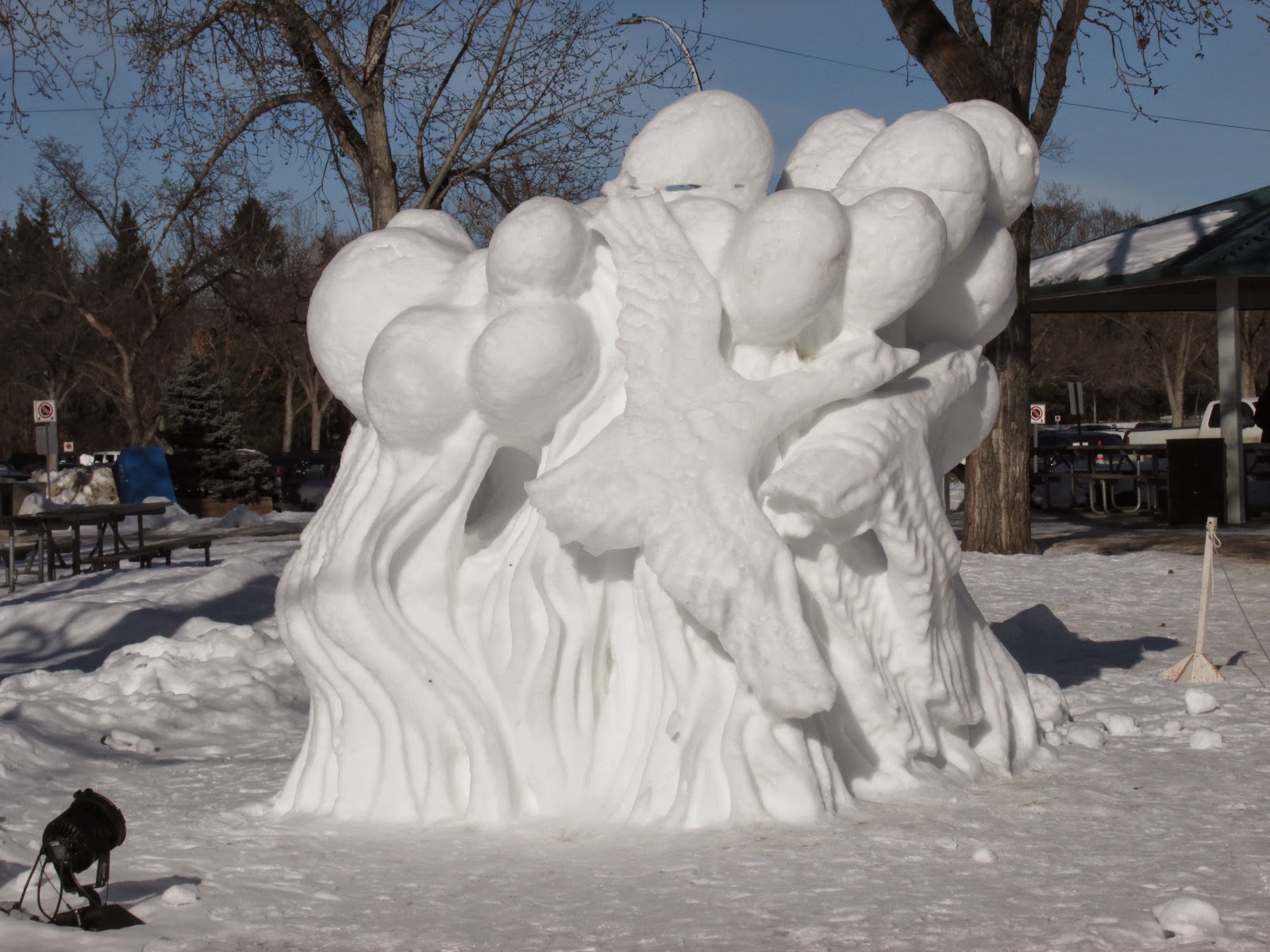 We never stopped moving until Chrissy found us the best seats in the park; on a straw bale of a horse drawn sled. 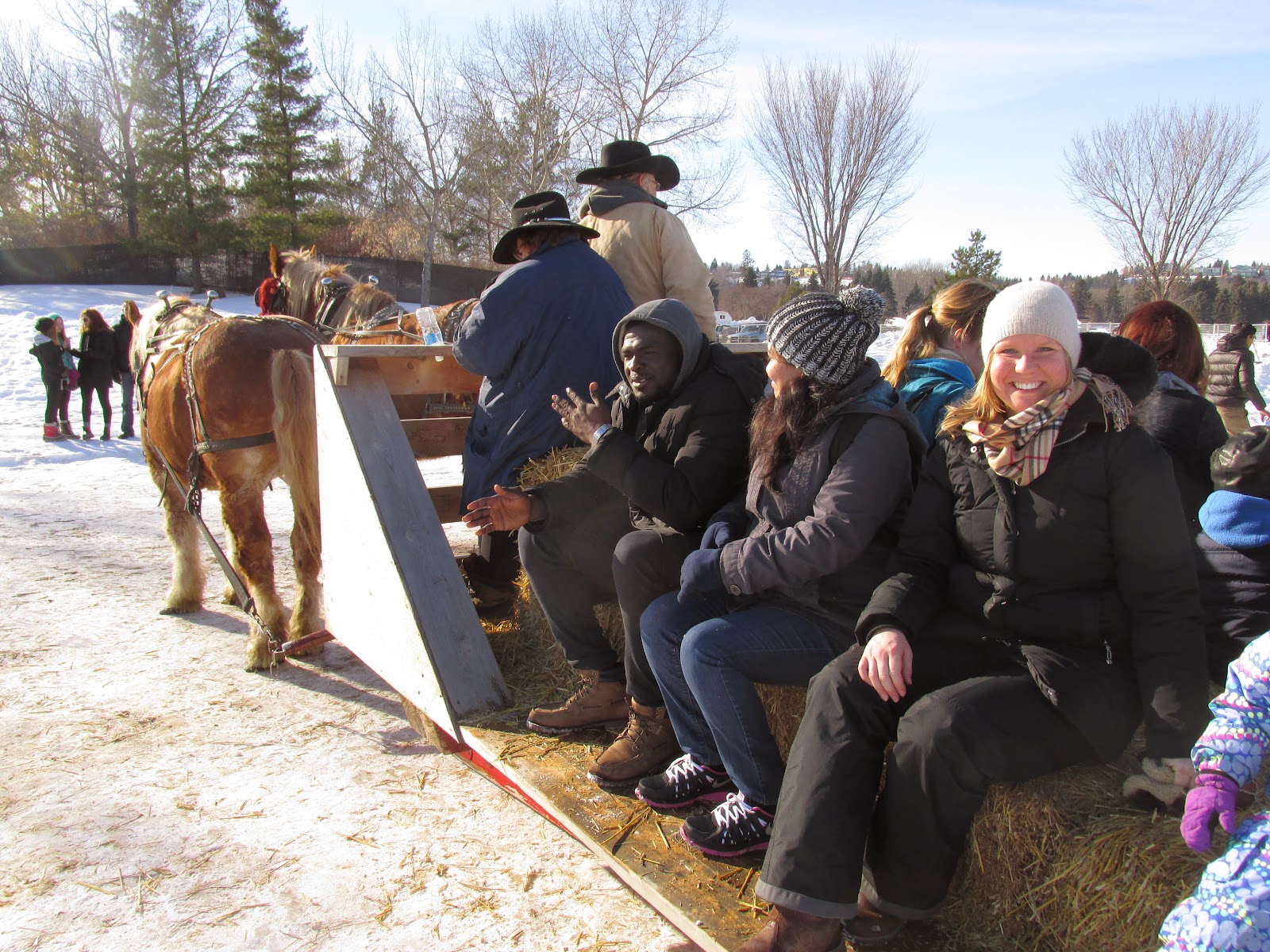 For years I have been advocating to anyone that would listen that Edmonton should host a Crashed Ice event. Finally, it happened this year! With huge expectations I monitored the construction of the track and even showed up to watch the initial flooding of the ice surface,

Viewed from above the track looked absolutely fantastic and my enthusiasm for the event was through the roof.

When the Friday of the race weekend arrived Chrissy and I bolted out of work to check out the heats. 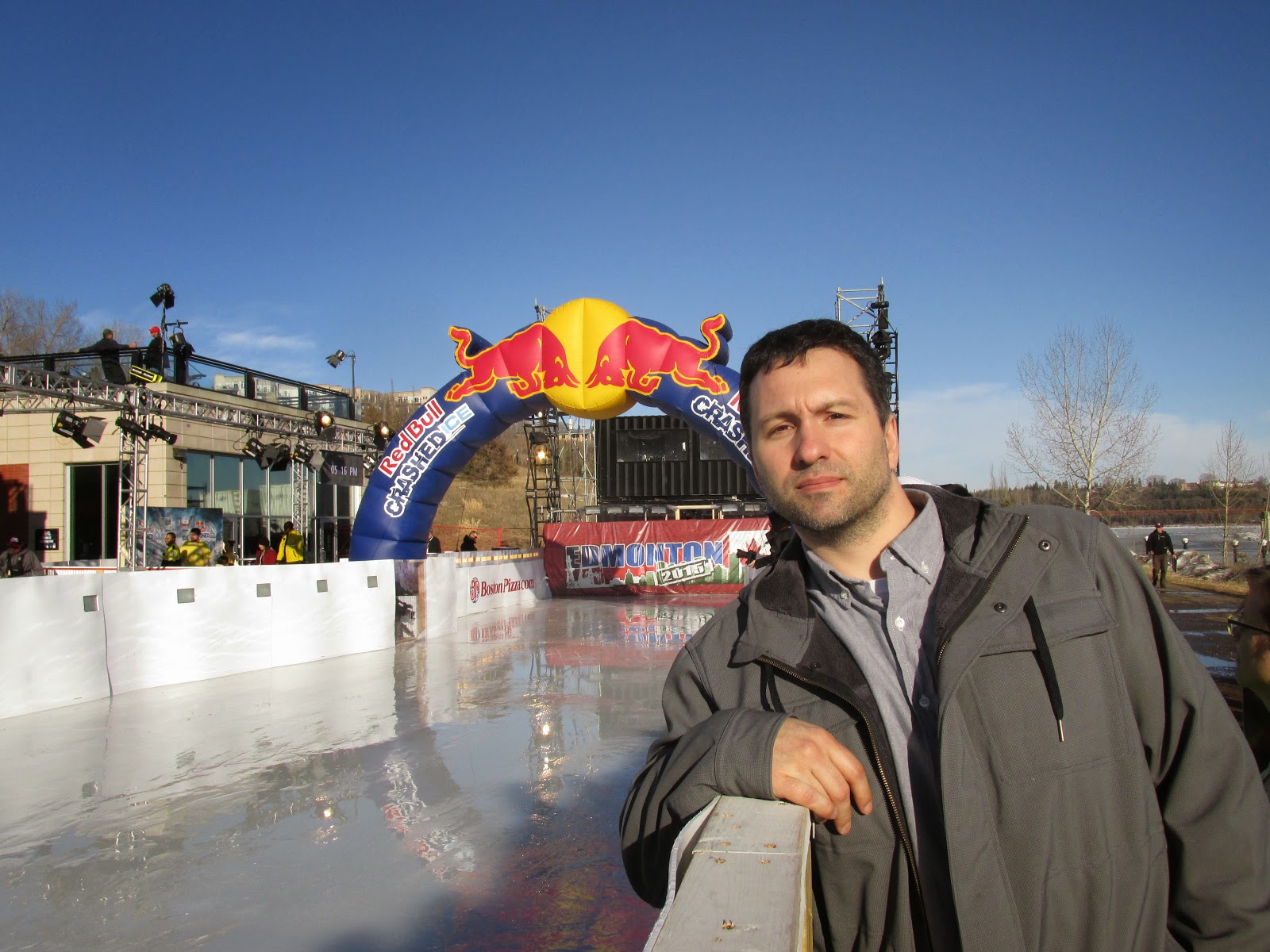 Unfortunately heat was the word of the day, but not on the ice. Instead Edmonton was awash in sunlight and the hottest day on record in a hundred years. All races were being pushed back further into the night to let the ice harden.

Slightly deterred, we headed out for supper and ended up back at the track shortly after 8PM for the team time trials. A good crowd was already forming.

We followed the track down into the river valley looking for spots along the wall and cool sight lines before stopping at the final curve. 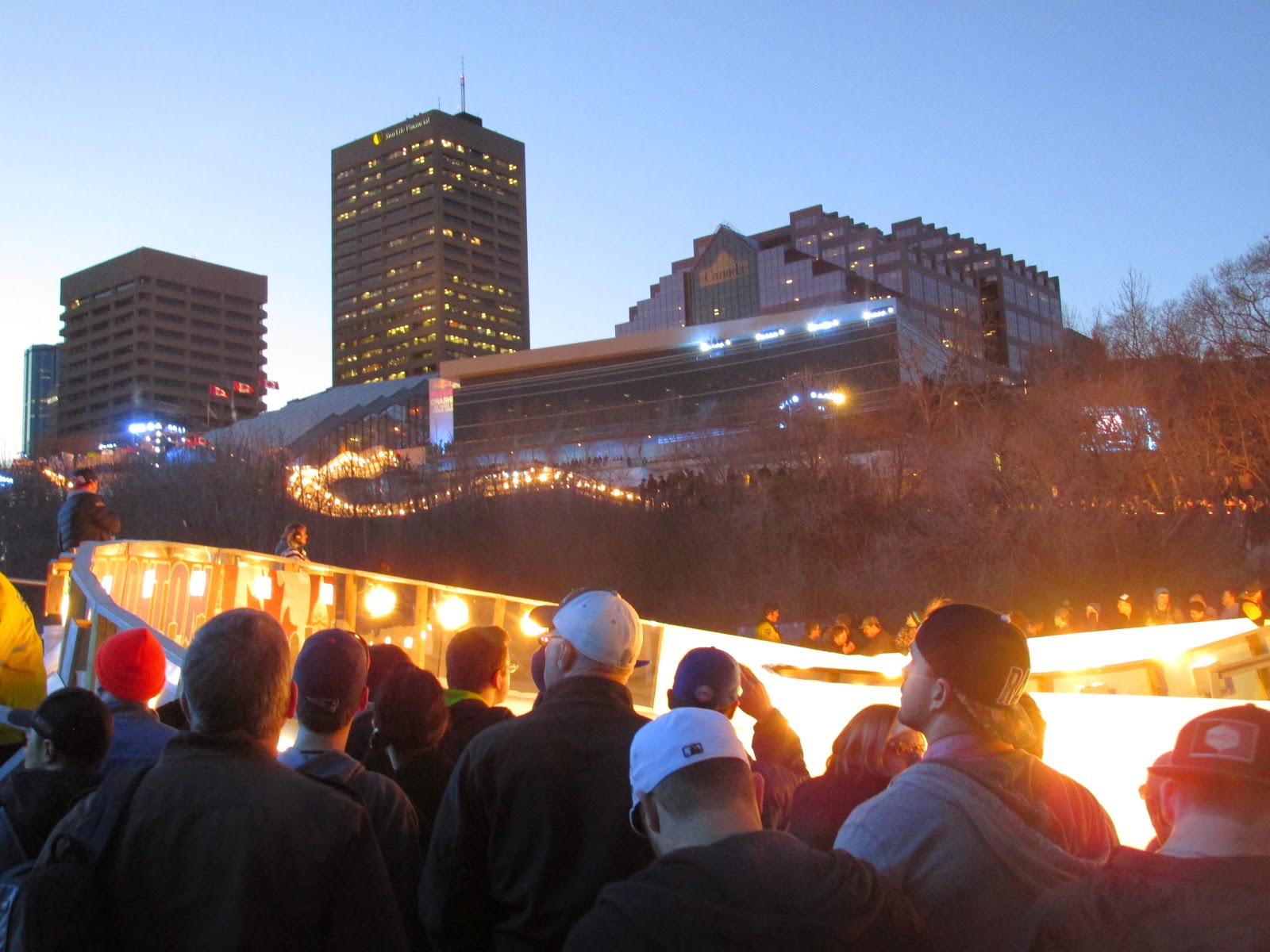 I am not a patient man so to entertain myself I decided that I would try and get a tweet on the big viewing screens. Chrissy and I laughed pretty good when my in actuality frustrated of waiting statement disguised as an excited twitter post was eventually highlighted. 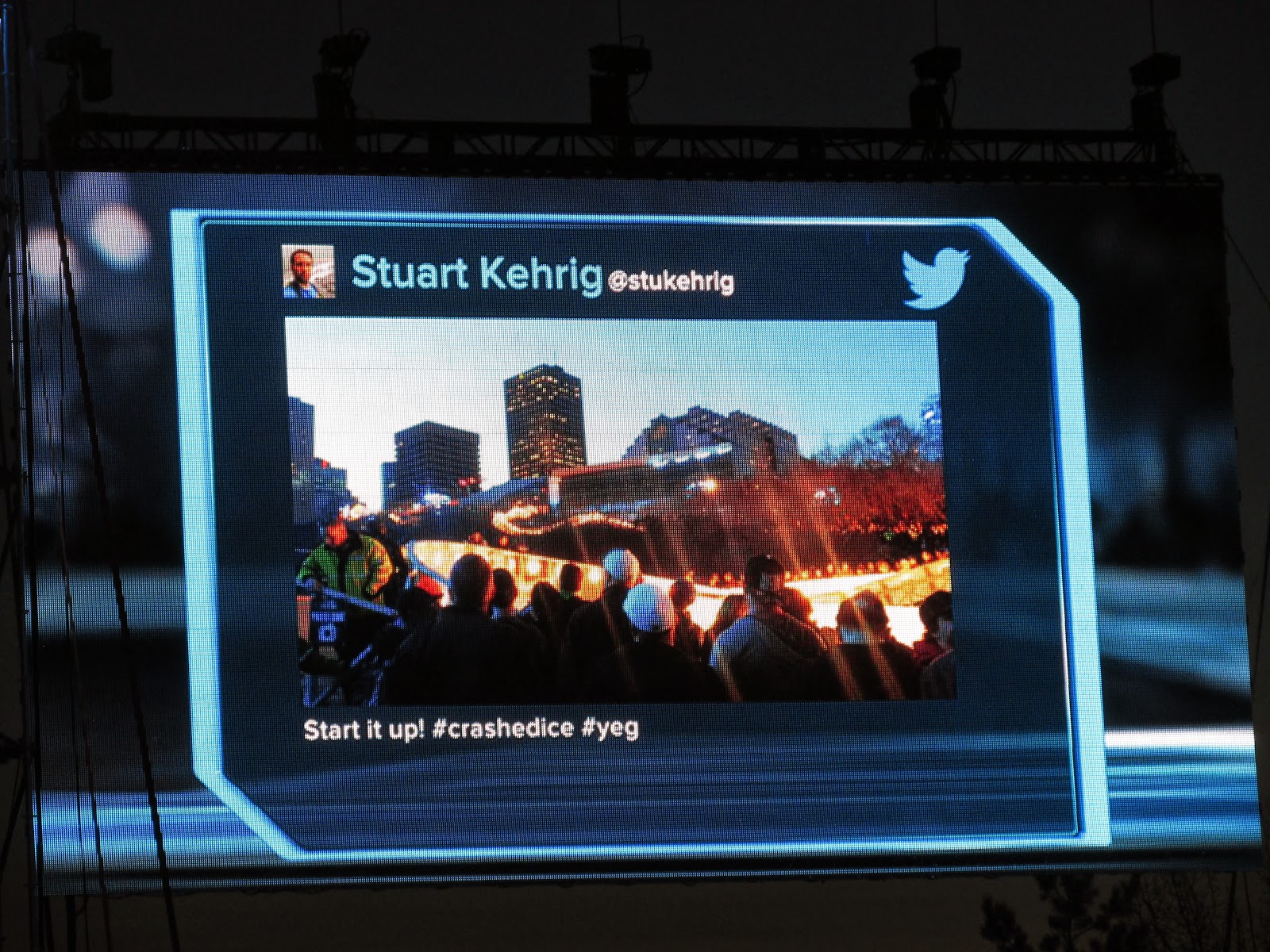 Eventually the races did start and I was rapt in attention as the first few skaters flew by us at crazy speeds. 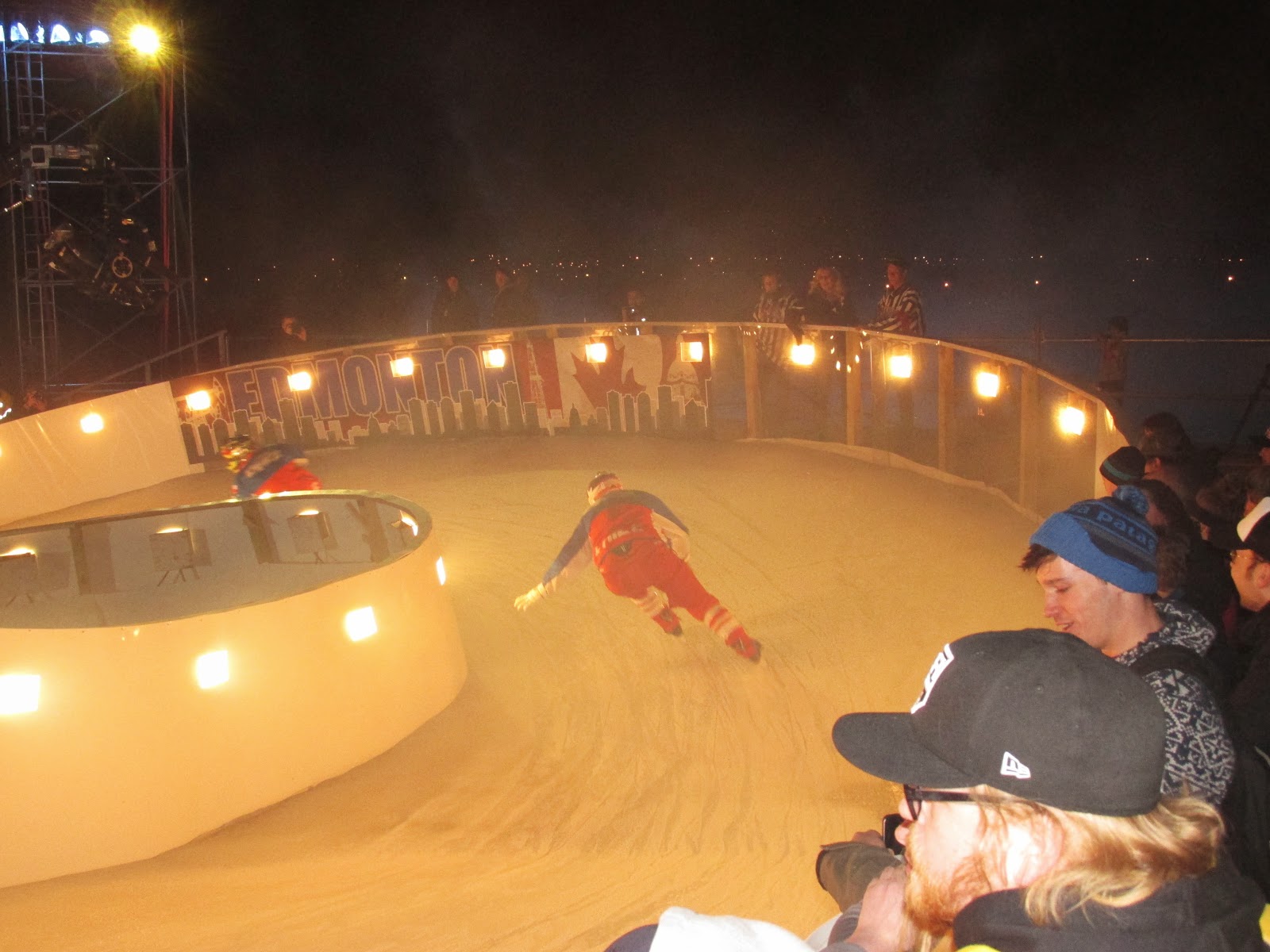 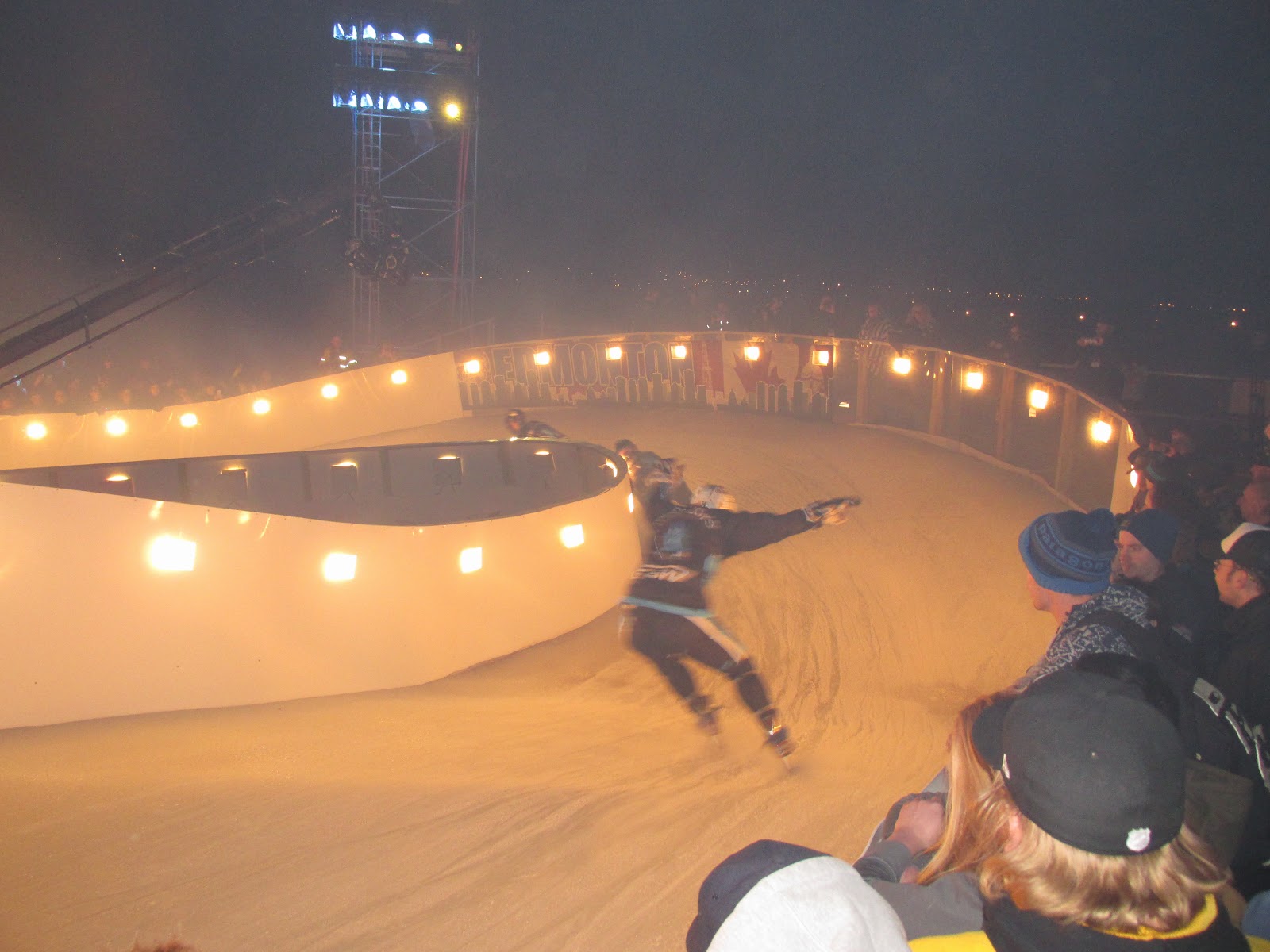 Even with a pretty killer spot I was getting a bit restless so I convinced Chrissy to walk up the track and see the race from more angles. 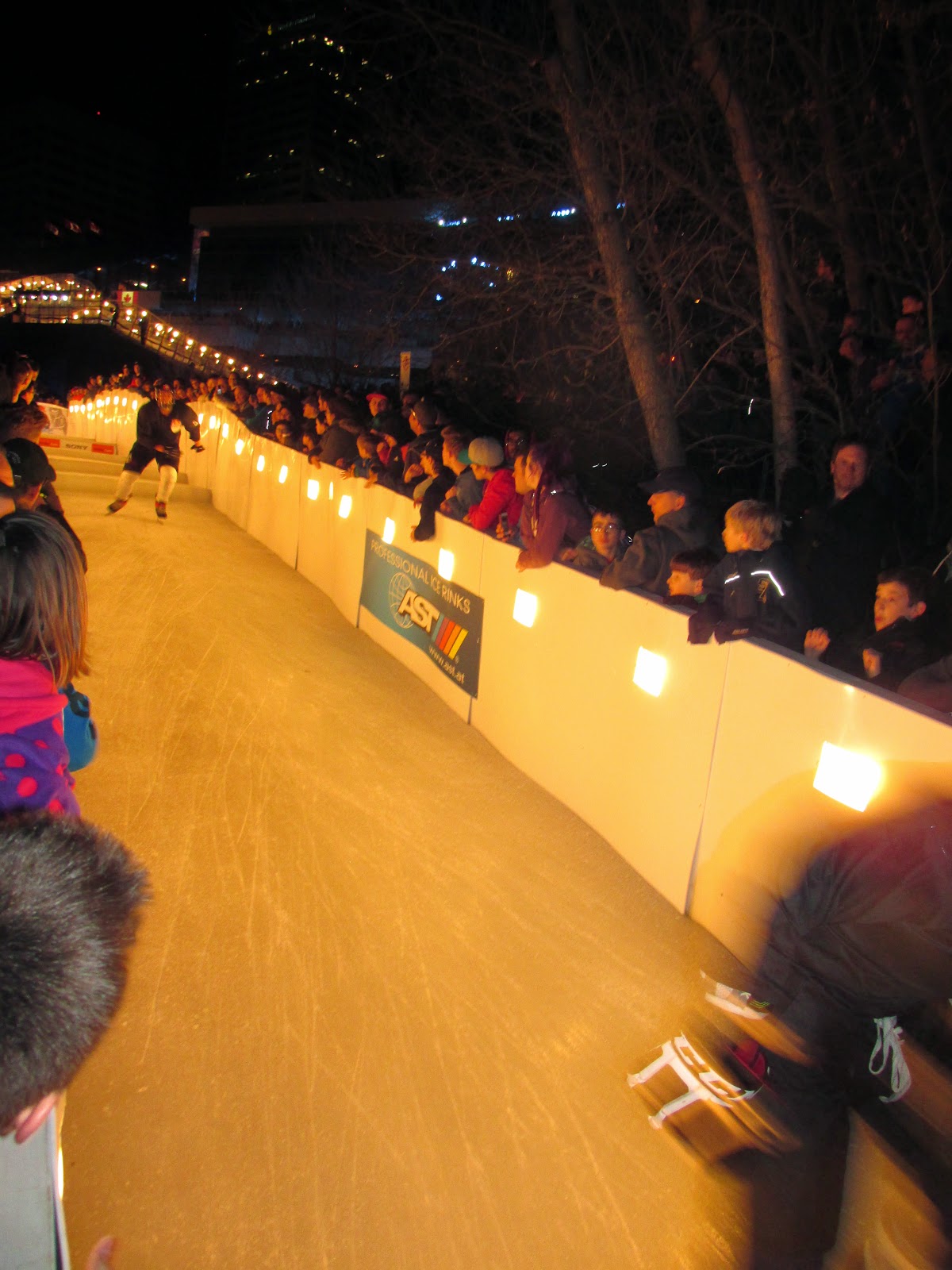 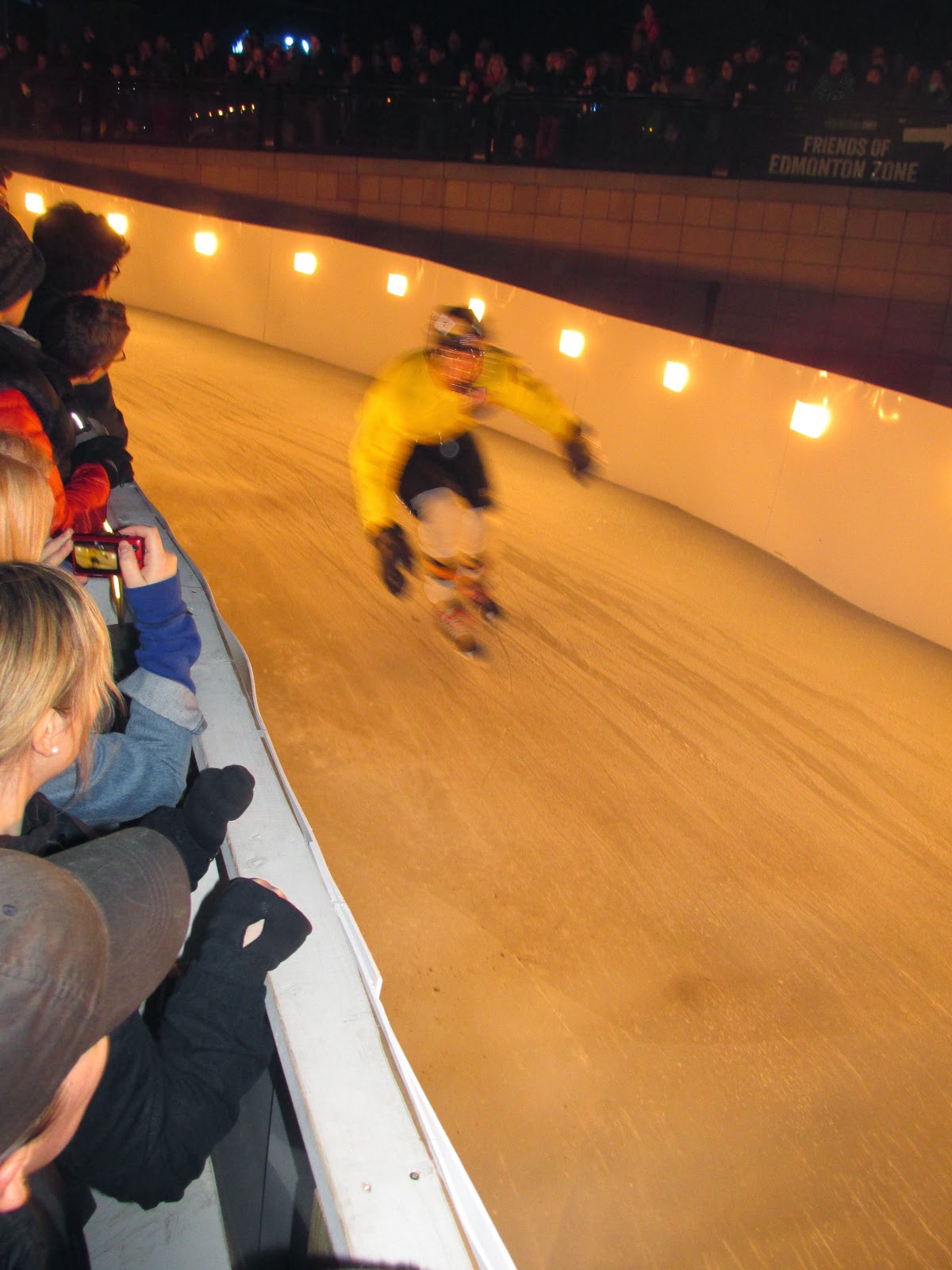 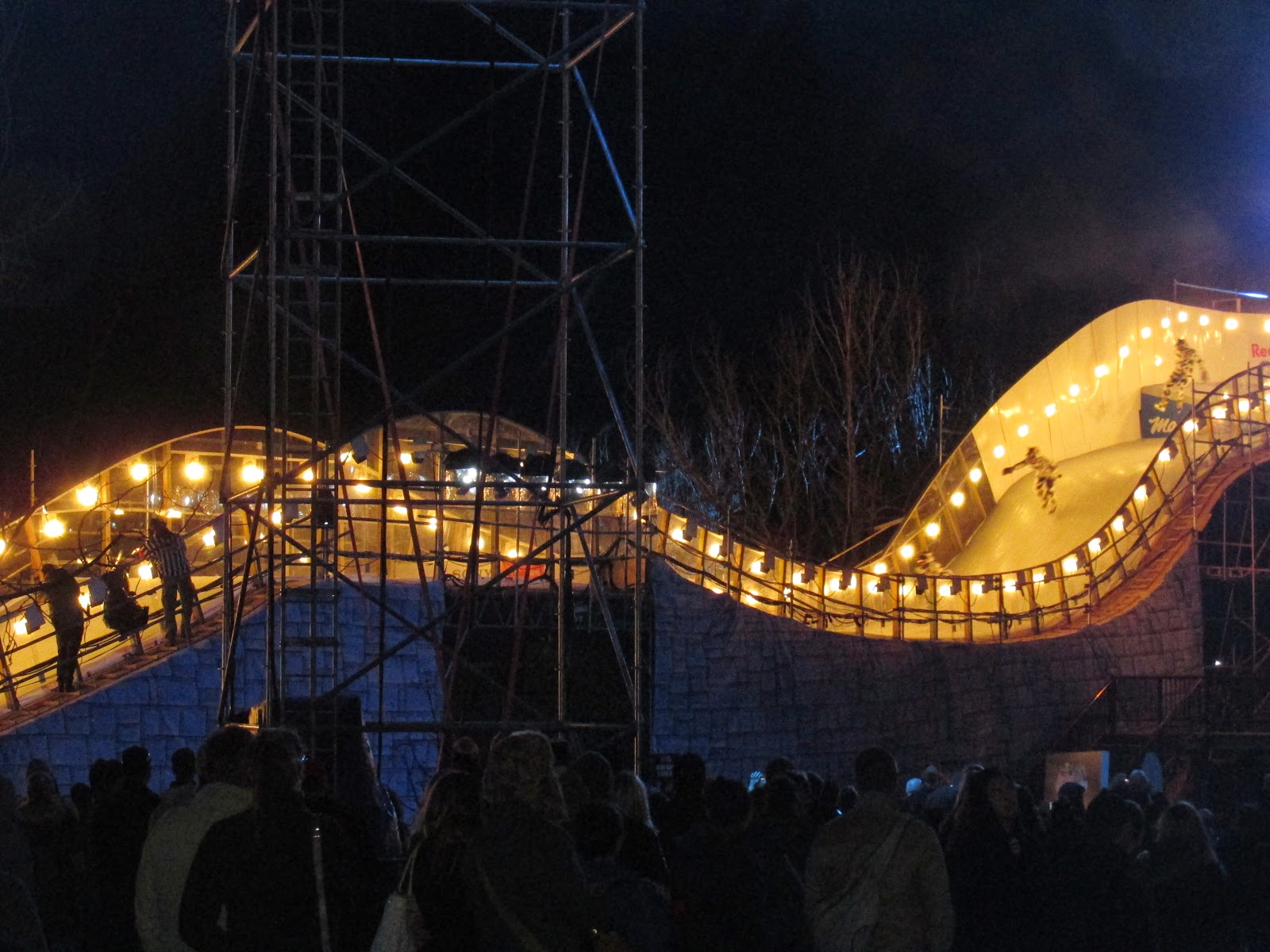 Friday night at Crashed Ice turned out to be the only time we got to see anybody go down the track as I chose to play rec-hockey Saturday night rather than watch the finals race.

I really enjoyed the spectacle of Crashed Ice on the Friday night but the experience left me a little wanting. Maybe it was my completely unattainable expectations, maybe it was my inability to really connect to the viewing experience of the sport, or maybe it was the unfitting warm weather but I wasn't too disappointed to miss the Saturday races.

Or, perhaps what really got to me was the static nature of the event itself. It didn't have any participatory aspect to it. Basically, it was a lot of standing and watching a screen. I could have used more general activities around the event and maybe something during to make me feel like I had a role other than just being there. I don't know...

I am hopeful though that Edmonton gets the chance to host the event again (and more Redbull events in general) as I feel like it could only get better.

As Edmonton strives to be more of a four season city it has adopted a Winter City Strategy. Included in the strategy is a promotional element to encourage more winter patios through the City. With a warm spell this March we have taken the opportunity to hydrate ourselves outside on a number of occasions. 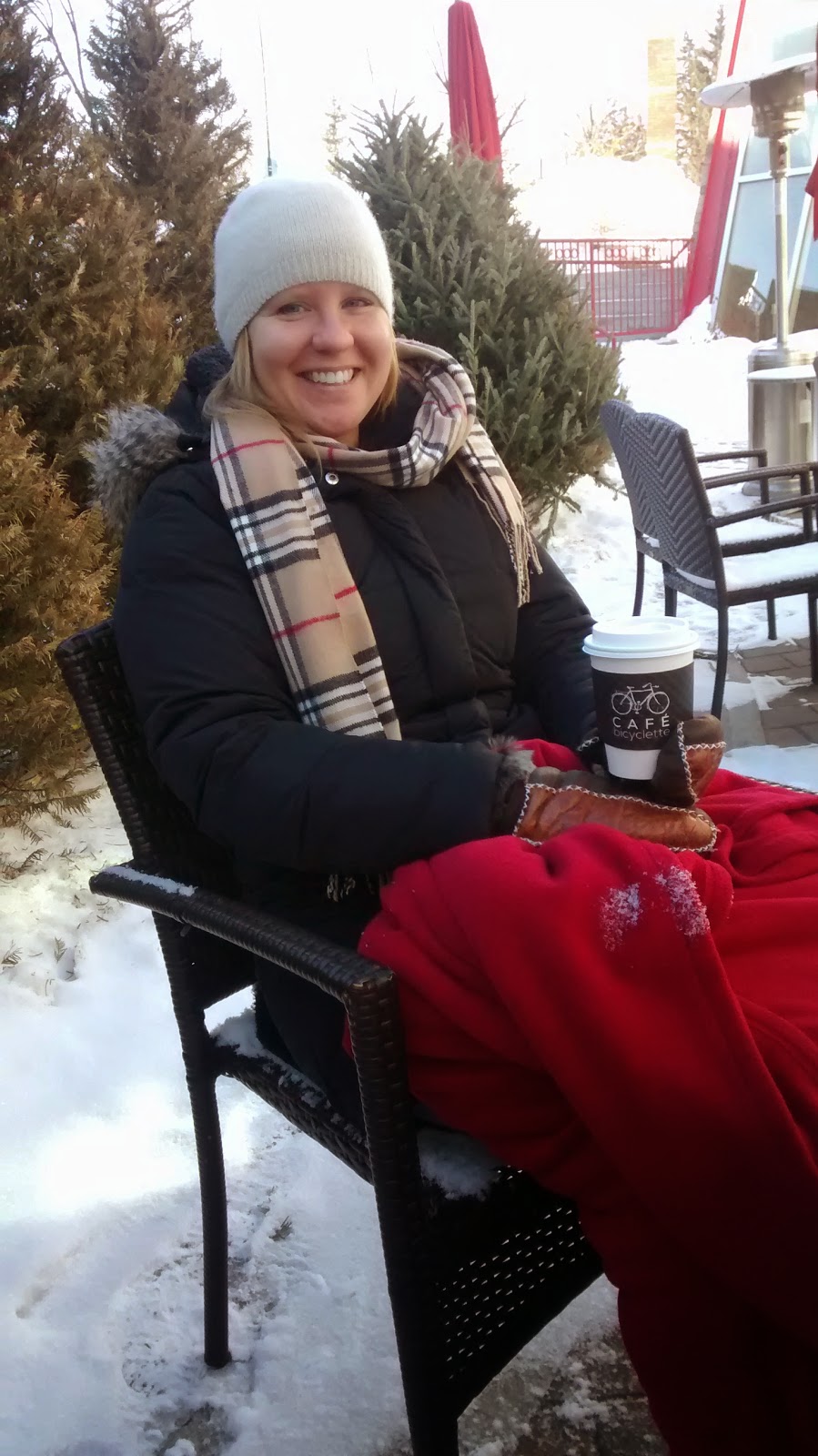 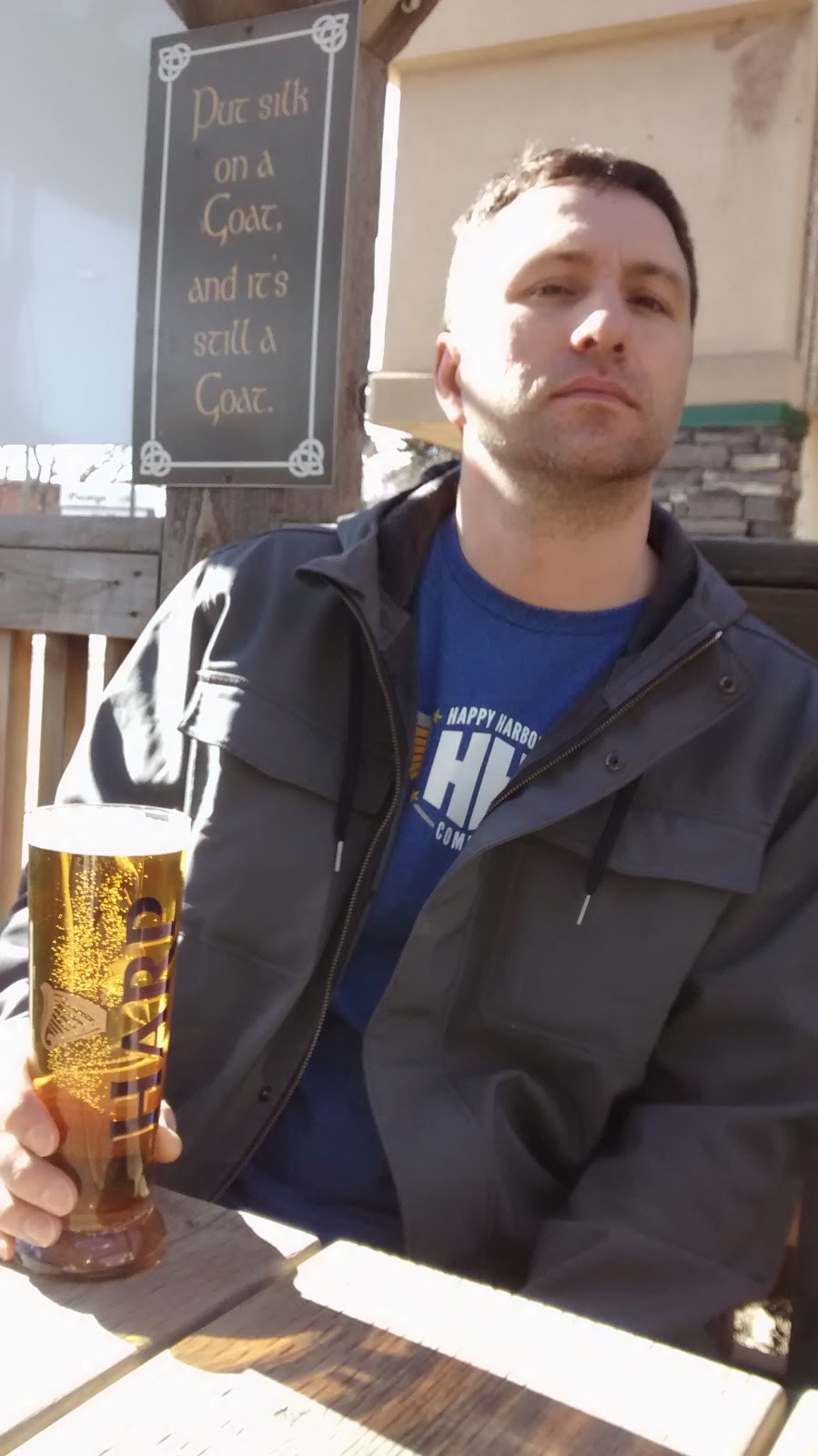 Joking around with too many coasters at Sherlock Holmes led me to my new favourite picture of the wife. This is her official "Making It Rain" face while drinking a Shirley Temple. Badass! 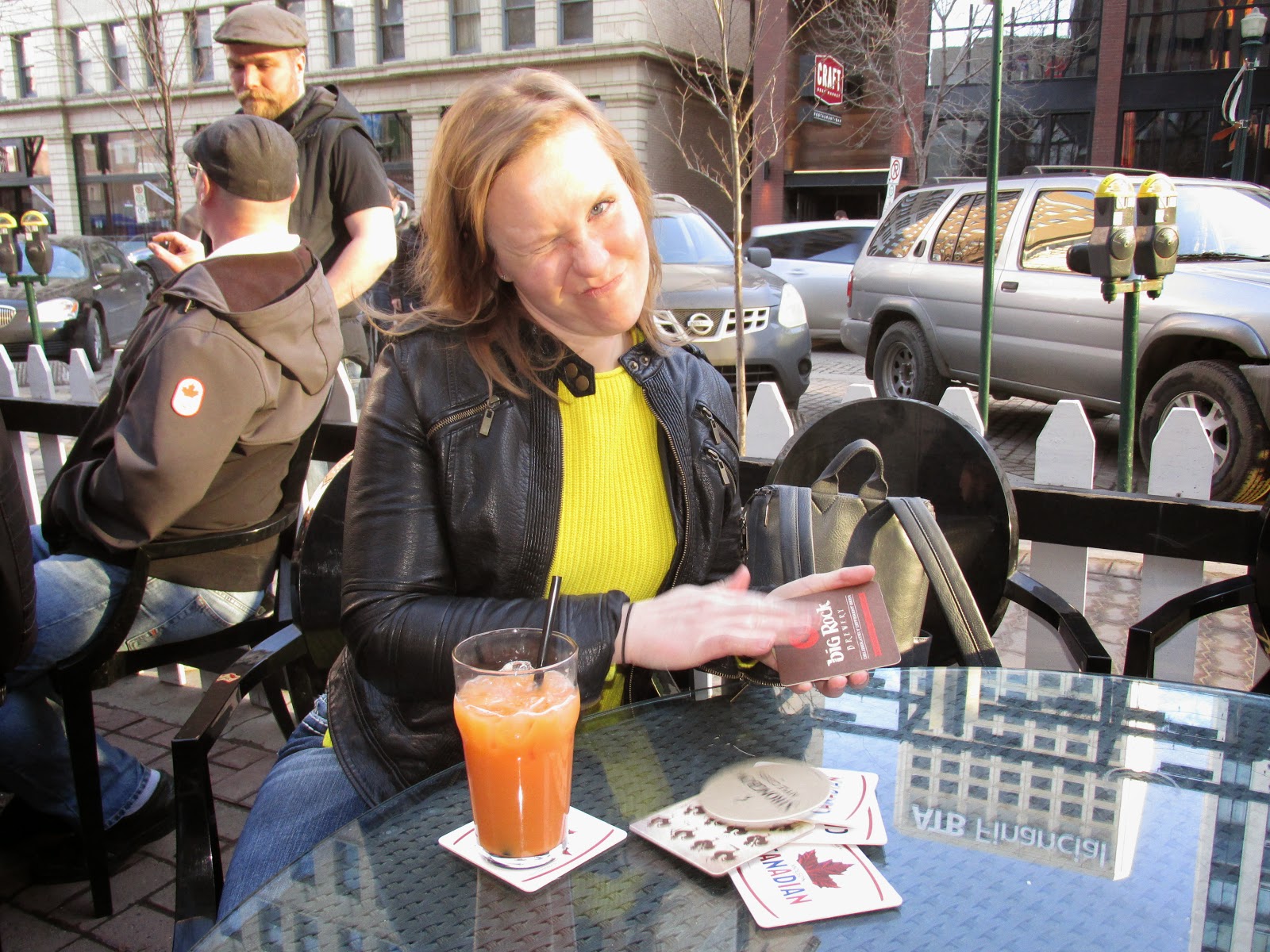 I think it's pretty obvious from this post that Chrissy and I have reconsidered our opinions on festivals in Edmonton. We plan on celebrating some new favorites in many winter to come.
Posted by Unknown at 11:36 pm